Shrubs or occasionally trees. Leaves alternate, simple or divided up to 3 times. Flower clusters with 1-many pairs of flowers, the clusters 1-sided, cylindrical to globose. Flowers irregular with knob-like tips in bud. Tepals 4, separating at least partially at flowering. Fruit a thin- or thick-walled follicle, rarely a nut; seeds 1-2, sometimes strongly winged.

Grevillea, probably the third largest genus in Australia after Eucalyptus and Acacia, has always been a popular native plant genus for the garden, grown for the interesting foliage and bird-attracting flowers. The numerous species and cultivars and hybridisation can make identification extremely difficult. Species display several flower forms: terminal and upright (cylindrical, ovoid or obovoid in outline); terminal and hanging; one-sided and toothbrush-like; few-flowered and spider-like with protruding styles; soft and feathery, etc.

A history of the genus in cultivation and full horticultural background for each species is given in Olde & Marriott (1994-95).

Grevillea and Hakea are notoriously difficult to distinguish. However, Hakea has thick woody capsules of 2 wood types and many of the species in the genus have cylindrical leaves, while the fruits of Grevillea are generally thinner-walled and of 1 wood type.

Seed collected from the wild; semi-hardwood and hardwood cuttings; grafting. 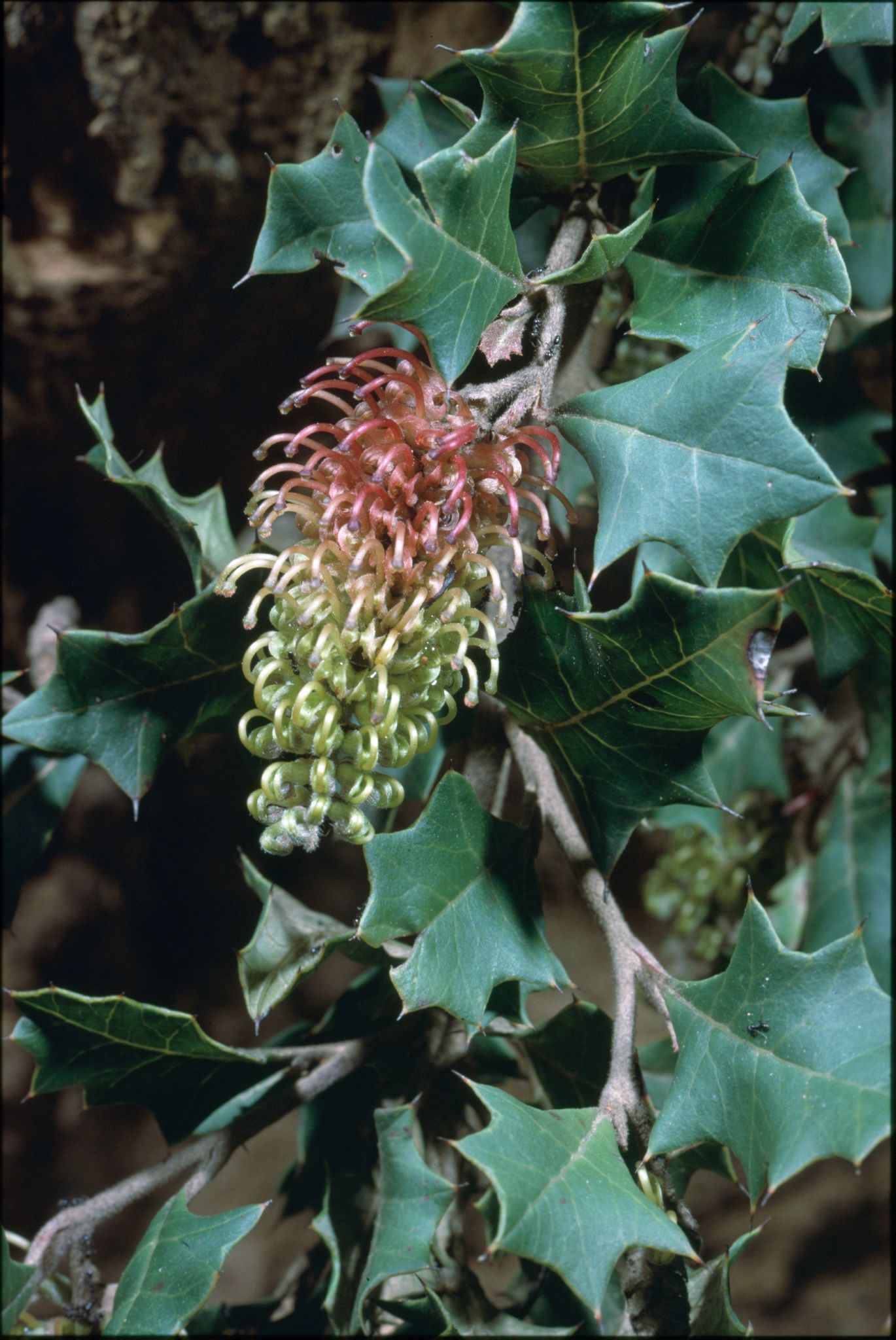 The following is a selection of the most commonly available cultivars. It should be noted that many cultivars have been released without necessarily having great horticultural merit, and parents of hybrids may be ornamentally superior to their hybrid selections. A great service would be done to Australian horticulture if commercially available cultivars were fully described and classified into formal cultivar groups, thus aiding identification and an assessment of the merit of new introductions.

Shrub to about 2-5 m tall and wide. Leaves broad, linear to about 2.5 cm long. Flowers in dense terminal clusters, orange-red over most of the year. Probable hybrid, G. juniperina × G. victoriae, raised by George Althofer at Nindethana Nsy, Dripstone, NSW, in 1957, the name commemorating his wife.

A low shrub to about 20 cm tall. Leaves broad, linear, hairy below with the margins rolled under. Flowers yellow, red at the base, spring to summer. G. alpina _ g. rosmarinifolia. Very similar to 'Austraflora McDonald Park' but with larger leaves and flowers. Int. Austraflora Nsy, Vic, c. 1984.

Spreading shrub with arching branches. Leaves lanceolate, to about 5 cm long, hairy below. Flowers in terminal or axillary slightly drooping clusters for most of the year, bright yellow with a green tip. Probable hybrid, g. juniperina prostrate yellow _ g. victoriae var. leptoneura. A selection from a private garden in Canterbury Rd, Blackburn,Vic, in 1971. Int.Austraflora Nsy,Vic, 1981.

Shrub to 1 m tall. Leaves linear, to about 3 cm long. Flowers year round in red clusters. Arose in the mid-1960s as a seedling of uncertain parentage selected by Nigel Quick at Dargan Hill Nsy, Glen Waverley,Vic.Very similar to g. rosmarinifolia.

As for 'Audrey' but leaves with an irregular yellow margin patterning. A variegated branch sport taken from 'Audrey' and int. by Sparks's Nsy,Wandiligong, ne Vic, in 1973.

A shrub to 1 m tall with arching, spreading branches. Leaves broad, linear, to about 5 cm long. Flower clusters in autumn and winter. Flowers red and cream. A hybrid, probably with g. rosmarinifolia as one parent. Popular as a low hedge.

Small to medium shrub to 2 m or so tall with large irregularly lobed leaves. Flower clusters large, pendent, year round. Flowers yellow at first, becoming orange-red. Like 'Robyn Gordon' but paler. Possibly a source of skin rashes. Correctly registered as 'Mason's Hybrid' but promoted in nurseries as 'Ned Kelly'. ['Kentlyn']

Shrub to 5 m or more tall. Leaves pinnately divided into deep linear lobes. Flower clusters cylindrical, to 20 cm or so long. Flowers pink with cream styles. Generally larger plant with longer flower clusters than 'Misty Pink'. Probable hybrid, g. banksii (red) _ g. whyteana (Mundubbera form), which arose as a chance seedling in the garden of Mrs Win Bristow, Brisbane, in 1975. A range of about 50 cultivars in the Poorinda series has been produced by Leo Hodge of Vic. While a number of these have no particular merit, the following are useful and widely available.

A hybrid, g. banksii (red form) _ g. bipinnatifida. Spreading shrub to about 1m tall and 1.5 m wide, the leaves divided. Flower clusters more or less toothbrush-like and red; almost year round. Originated as a spontaneous hybrid at Myall Park, Glenmorgan, Qld. The most popular grevillea in cultivation, named after the eldest daughter of David and Dorothy Gordon. Unfortunately some people may develop skin rashes when handling the plant and gloves should be worn. Very similar to 'Coconut Ice', 'Mason's Hybrid' ['Ned Kelly'] and 'Superb'.

A compact selection of g. rosmarinifolia, about 1.2 m tall and wide with large, pendulous flowers of pink and cream; autumn to spring. Originating from s NSWTablelands. Registered by Austraflora Nsy, Vic, with acra 8 Oct 1990.