Jeffrey Jeanes with comments from David Jones and David Banks.

Perennial or rarely annual herbs, monopodial or sympodial, ground-(terrestrial), tree- (epiphytic) or rock-dwelling (epilithic), sometimes saprophytic (these not usually amenable to cultivation), with creeping rhizomes, thickened rootstocks or annually renewed tubers, aerial stems often thickened at the base into a pseudobulb, adventitious aerial roots sometimes abundant, terrestrial species usually forming mycorrhizal relationships with soil-borne fungi. Leaves basal or on stems, usually alternate or spirally arranged, rarely opposite, deciduous or persistent, mostly entire, usually sheathing at base, sometimes reduced to bracts or scales, usually stalkless; stipules absent. Inflorescences terminal or lateral spikes, racemes or panicles, or flowers solitary. Flowers unisexual or bisexual, more or less irregular, usually stalked, often the stalk twisting through 180 degrees inverting the flower (resupination), usually bracteate. Perianth consisting of 6 segments, an outer whorl of sepals and an inner whorl of petals, free or variously joined, rarely completely fused into a tube. Sepals 3, similar or sometimes differentiated into a dorsal and 2 laterals. Petals 3, nearly always differentiated into a median (often termed the labellum or lip) and 2 laterals (these are often similar to the sepals). Labellum usually large and showy, often 3-lobed, frequently adorned with further lobes, appendages, teeth, calli or shiny glands, sometimes with a basal spur or sac, fixed at the base, hinged and mobile or actively motile, sometimes insect-like. Stamens usually 1 (rarely 2 or 3), completely or partly fused with 2 lateral staminodes and the style to form the column (gynostemium). Anthers usually 1, mostly 4-celled, opening by longitudinal slits; pollen granular or often aggregated into bundles (pollinia), which are shed as a unit. Pollinia usually 4, but sometimes 2, 6 or 8. Ovary inferior with one cell and many ovules attached to the walls. Stigma 3-lobed.a sterile part of the median lobe (the rostellum) is sometimes involved in pollen transfer; sometimes a portion of the rostellum is modified into a viscid disc (the viscidium) and is attached to the pollinia via 1 or 2 straps of tissue (stipes). (Pollinia, stipe, caudicle and viscidium are often shed together as a unit called a pollinarium). Fruit usually a dry capsule, opening by 3 or 6 longitudinal slits, rarely indehiscent. Seeds numerous, usually minute and dust-like rarely fleshy or sclerotic.

Nearly all orchids are pollinated by animals, usually insects (some are self-pollinating or apomictic). For pollination to occur effectively the flowers have evolved various means of advertisement and reward. The pollinator is first drawn to the flower by colour, shape, movement or scent.To ensure that the pollinator will visit other flowers of the same species it is often rewarded with food in the form of nectar, pollen or pseudopollen. Elaborate mechanisms have evolved to bring about transfer of pollinia during these visitations. There is often some degree of specificity between orchids and their pollinators.

Monadenia (Disa) bracteata is a small invasive weed from S Africa covering several thousand square kilometeres in WA and widespread in SA. More recently it has invaded several areas in Vic. It is beyond the scope of this work to attempt to describe all the orchids currently in cultivation, due to the enormous number of species, hybrids and cultivars involved. Some orchids or groups of orchids may enjoy popularity for a while, and then fade into relative obscurity. Other groups such as native Australian orchids or terrestrial orchids are sometimes grown by enthusiasts, and may be only available from specialist nurseries or orchid clubs and societies. This account covers the more commonly grown orchid genera and the more popularly grown species within each genus.

The orchids as a group are readily identified by a number of distinctive characteristics, most notably the fusion of the stamens and style producing the column. A knowledge of the structure of orchid flowers and an understanding of the terminology relating to their various components, are useful aids to identification. Many of the terms that have been coined to describe the various features of the Orchidaceae are discussed in the family description above and delineated in the accompanying line drawings.

Orchids have few uses except as ornamental plants and in the cut flower trade. Genera used by florists include: Arachnis; Cattleya, Corsage Orchid; Cymbidium; Dendrobium; Laelia; Lycaste; Odontoglossum; Paphiopedilum, Slipper Orchid; Phalaenopsis, Moth Orchid; and Vanda. Vanilla is extracted from the immature capsules of V. planifolia which is grown as vines grown on frames, 90% produced in Madagascar. Flavourings are also extracted from Angraecum and Leptotes.A gum used in musical instruments is extracted from Geodorum.

Leaf veins generally parallel along the length of the leaf; fertile stamens 1 or 2 fused with the style to form a column; pollen in masses (pollinia); third petal greatly modified to form a lip (labellum).

CONSERVATION World wide the popularity of orchids has lead to over-zealous collectors depleting wild populations, sometimes to extinction. Every care should be taken to make sure that all orchids grown in collections are obtained by legitimate means.

This account follows the classification used in Dressler (1981), and draws heavily upon that work particularly in the formulation of the key to major groups (the Tribes); Bechtel et. al. (1981); Hawkes (1965); Jones (1990); Walters et al. (1984.). Hybrids are published in Sander's List of Orchid Hybrids.The Royal Horticultural Society is the registration authority for these names and regular supplements are published to this book.

Key to the genera of Orchidaceae 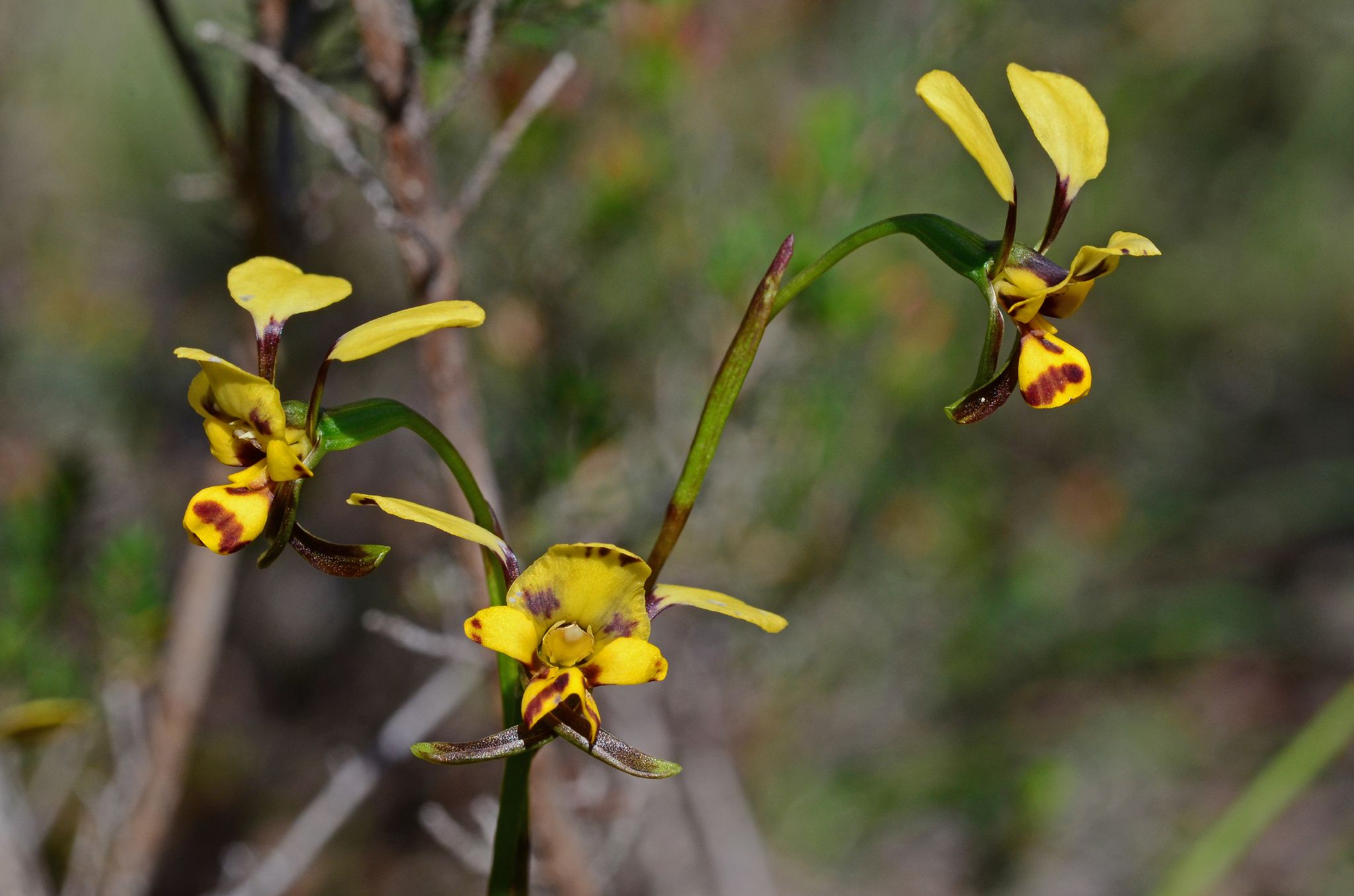