Annual and perennial herbs, shrubs, trees or climbing plants, often with thorns or prickles. Leaves deciduous or evergreen, alternate or whorled, simple to palmately or pinnately compound and sometimes in a basal rosette; margins entire, lobed or toothed; stipules mostly present and attached to leaf stalk, sometimes shed early. Flower clusters terminal or axillary, cymose or racemose, or flowers solitary. Flowers mostly bisexual, regular, usually perigynous but sometimes epigynous, the hypanthium with a nectariferous disk. Sepals 5 (rarely 3-10). Petals 5 (rarely 0 or 3-10), more in some cultivars, free. Stamens mostly numerous and in whorls (rarely 1 or 5), free or attached to the hypanthium wall, the filaments sometimes fused at the base. Carpels mostly numerous, free, occasionally 1-5. Ovary inferior or superior, the ovules with basal, axile or parietal placentation. Styles the same number as carpels. Fruit an achene, drupe, follicle, hip or pome, the receptacle assuming a range of forms (in some cases producing fruits of economic importance).

The family Rosaceae is sometimes divided into subfamilies, chiefly on characters of the fruit. Some authorities have raised these subfamilies to the rank of family. The following subfamilies are widely recognised:

Rosoideae (Rosaceae in the narrow sense) with carpels mostly numerous, free, with 1 ovule per carpel and 1 seed per fruit, which is usually a drupe or an achene; stipules present.

Maloideae (Malaceae - incorporating Spiraeoideae and Pomoideae) with carpels (1)2-5(-12) and with 2 or more ovules fused to the inner wall of the hypanthium, the fruit a follicle, achene or pome; stipules present or not.

Prunoideae (Amygdalaceae) with carpels usually 1, containing 2 ovules, only 1 of which forms a seed, fruit a drupe; stipules absent.

A number of genera are susceptible to the bacterial disease, Fireblight (see Cotoneaster).

The following species are rare in cultivation.

Cercocarpus montanus Rafin. is a shrub or small tree from W North America to Mexico occasionally grown for the attractive flowers and fruits; it has mostly oblanceolate or elliptic leaves that taper towards the base. The flowers, which do not have petals, are about 4 mm wide. [Syn. C. betuloides Torr. & Gray]

Dryas octopetala L. Mountain Avens, from northern temperate regions is an evergreen prostrate shrub with leaves that are white-hairy below; it is used in cool-climate rockeries.

Margyricarpus pinnatus (Lam.) O. Kuntze, Pearlfruit (Pear Fruit), is a prostrate shrub from the Andes of S America; it is the sole species in this genus and is cultivated for the yellowish stems which have clasping papery stipules, evergreen foliage and pearl-like berries. [M. setosus Ruiz & Pav.]

Oemleria cerasiformis (Hook. & Arn.) Landon, Indian Plum (Osoberry), from W North America is the only species in the genus. It is an ornamental shrub to 5 m tall with fragrant flowers, the sexes on different plants and thin-fleshed bitter-tasting but attractive blue-black fruits about 1-1.5 cm wide.

Prinsepia sinensis (Oliv.) Bean is a thorny ornamental shrub from Manchuria, growing to about 2 m tall, with yellow flowers and purple or red cherry-like juicy fruits 1-1.5 cm wide. Similar to Prunus, it differs in having stems with chambered pith.

About 110 genera with about 3100 species, cosmopolitan but mostly northern temperate E Asia, N America and Europe.

A commercially important family which is the source of many fruits including: Quince (Cydonia), Loquat (Eriobotrya), Strawberry (Fragaria), Apple (Malus), Medlar (Mespilus), Almond, Apricot, Cherry, Nectarine, Peach and Plum (all in the genus Prunus), Pear (Pyrus), and Blackberry and Raspberry (Rubus). Several species of Prunus may be toxic, as they contain chemicals that may be converted to cyanic acid when ingested.Various medicines are derived from species of Prunus and Rosa and perfumes are extracted from Rosa.

Key to the genera of Rosaceae 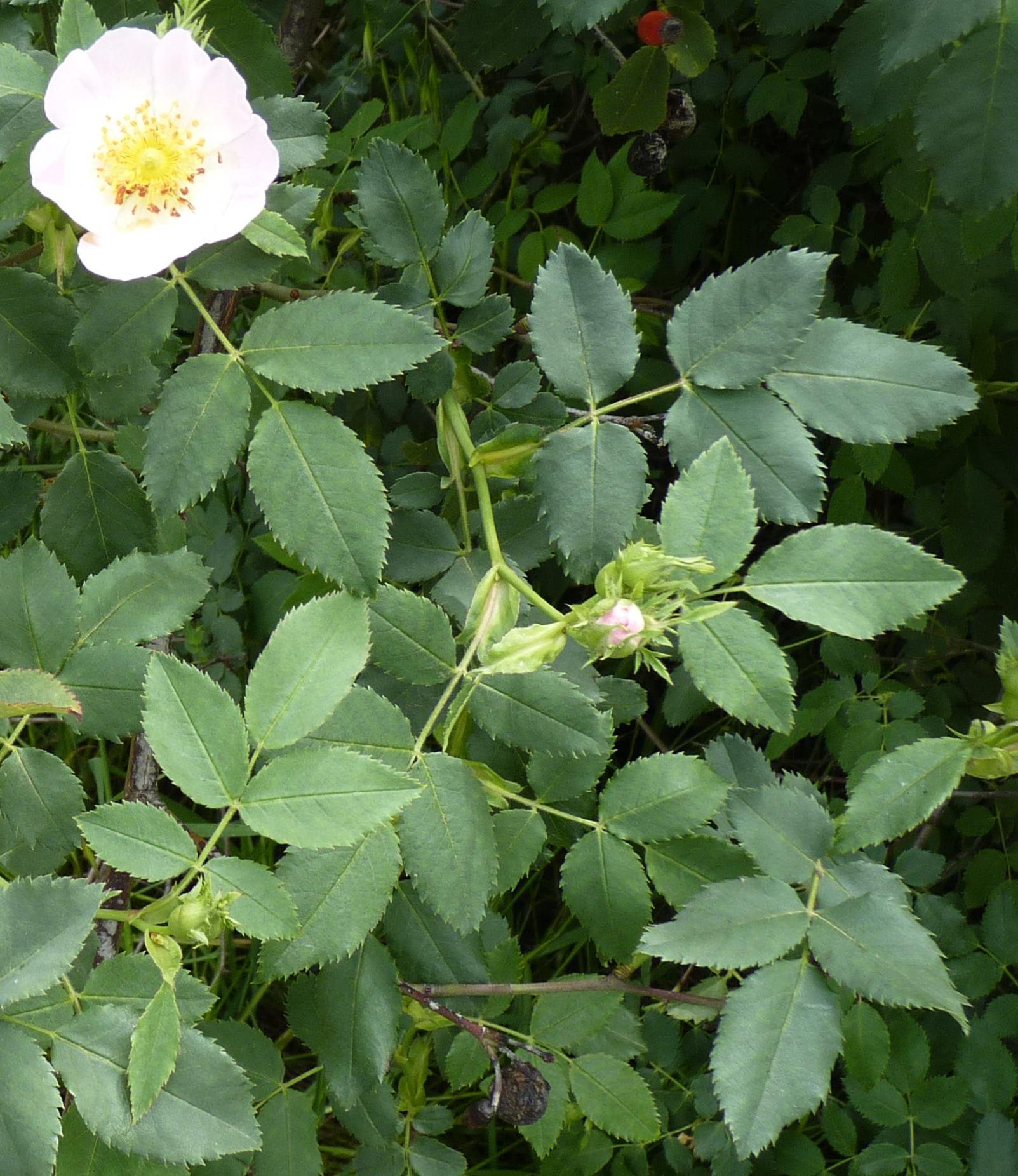