From the name Proteus, an ancient Greek sea God with the ability to change form; referring to the great variability of the species in this genus.

Prostrate to erect shrubs and small trees, some with lignotubers. Leaves entire, leathery. Flower heads terminal or occasionally axillary and in groups, often with colourful bracts that may have coloured hair, the flowers contained within these. Flowers bisexual, irregular, perianth segments 4, 3 fused, the remaining 1 spreading as the flower opens. Style straight or curved. Fruit an achene.

Mostly shrubs, grown for the spectacular and colourful cone-like flower heads with colourful buds and waxy, fringed bracts popular as cut flowers. Species from the winter rainfall zone of S Africa are cultivated and many of these are endangered in their natural habitat.

The collective name 'proteas' is generally used to indicate S African genera, the genus Protea itself sometimes being distinguished by the common name Sugarbush.

Very few species of Protea were listed in 19th century nursery catalogues. Interest in S African Proteaceae gathered momentum in the early 1900s, when soldiers returning from the Boer War brought small quantities of seed home with them. However, it was not until the mid-1970s that seed of a wide number of species was imported and some proteas were planted for commercial production. Protea and Leucospermum were introduced first, then Leucadendron. It was at this stage that Peter Mathews established Proteaflora Nsy which was to play an important role in developing the cut flower industry in Australia. Proteaflora pioneered the introduction of new cultivars, advised cut flower growers on cultivation methods, established the first Protea flower marketing cooperative and encouraged the establishment of the International Protea Association in 1981 (the IPA coordinates and initiates research and focuses the activities of all involved in the Protea industry). Proteaflora also introduced these plants to home gardeners by holding festivals in 1984 and 1985 and has agreements with breeders and selectors to trial and commercialise new varieties. Proteas are now an important element of Australian floristry and the home garden landscape. The following are important floristry plants: Protea 'Pink Ice'; Protea compacta hybrids; Protea neriifolia; the Leucadendron cultivars 'Pisa', 'Red Devil', 'Silvan Red' and L. laureolum; Leucospermum cordifolium and the cultivars 'Firewheel' and 'Tango'; and Serruria florida. These are marketed not only in Melbourne and Sydney but also Japan, Taiwan, Singapore, Hong Kong, USA and to a lesser extent Europe, where Australia competes with cheaper products from S Africa.

About 115 species from tropical and southern Africa. About 70 are endemic to the SW and SE Cape in a narrow coastal belt,while about 45 species occur to the north of this, about 13 from the summer rainfall zone of southern Africa.A further 35 or so are from central and tropical Africa.

Flowers in large flat-topped heads with many basal bracts. Differs from the other S African genera Leucadendron and Leucospermum in having leaves not notched at the tip, and flower heads with shield-like bracts at the base.

Key to the species of Protea 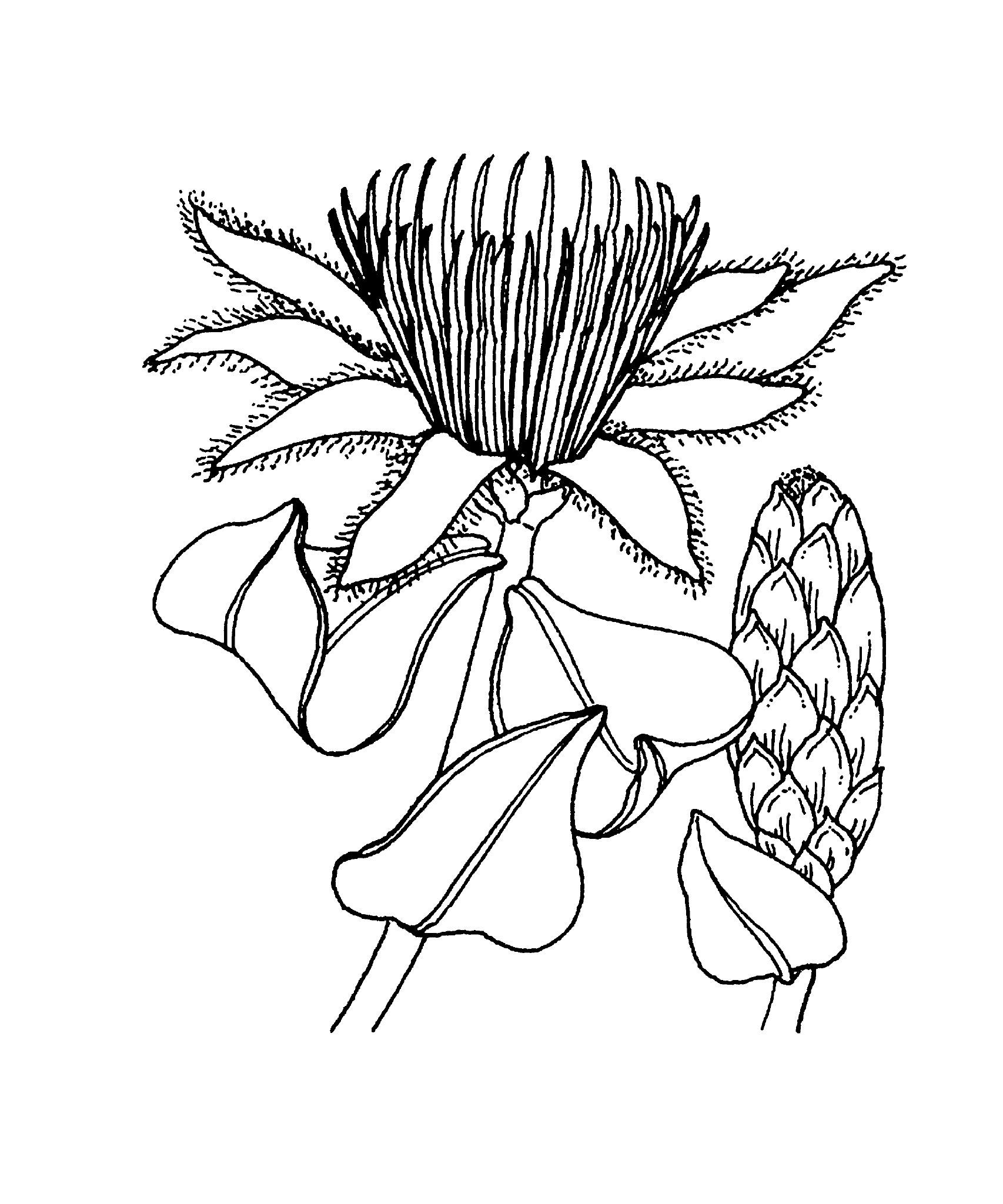 A P. longifolia hybrid with a pink flower cluster, the inner bracts with a white fringe and flower mass pink; Feb-May, Sept-Oct. Raised by Proteaflora in 1989.