Annual or perennial herbs, often rhizomatous, rarely woody (mostly bamboos). Stems (culms) usually cylindrical, jointed, often hollow in the internodes and solid at the nodes. Leaves 1 per node, sometimes crowded at the base of the stem, alternate and usually in 2 rows, consisting of a sheath, ligule, auricles, collar and blade. Sheath with margins free and overlapping, rarely fused. Ligule at the junction of blade/sheath a hairless or ciliate membrane, a row of hairs, or (rarely) absent. Leaf blade usually linear, occasionally wide, flat, rolled or folded, parallel veined. Flower cluster (inflorescence) with individual flowering units, called spikelets, arranged in open or dense panicles, racemes or spikes (sometimes digitately arranged). Spikelets of 1-many florets borne above 2 (1 or 0) bracts called the upper and lower glumes, the main axis of the spikelet (the rachilla) bearing the florets sometimes extending beyond the terminal floret and occasionally spine tipped. Flowers (florets) mostly bisexual (but one or more florets characteristically sterile in some groups) and with 2-3 fleshy scales (lodicules) thought to be a remnant perianth, within 2 bracts, the lemma (lowermost) and palea (uppermost, occasionally absent). Stamens (0-)3(-6), shortly protruding at flowering. Styles usually 2, plumose. Carpels 2 or 3, united. Fruit a caryopsis.

It is thought that most grasses are derived from bamboo-like ancestors.The savannah grasses arose with the emergence of vast grasslands resistant to fire and grazing and with the evolution of groups having a metabolism suited to warm, dry climates. Most grasses are wind-pollinated with large, versatile anthers that move in the wind and feathery stigmas to catch pollen. Seed dispersal by animals or wind is often aided by the presence of awns.

The grasses are well represented in horticulture (as ornamentals, on playing fields, golf courses and lawns), in agriculture, and as wayside weeds. Only the more commonly cultivated species and cultivars are covered in this account.

Bamboos: Bamboos have pleasing forms and foliage: they may be variously coloured and sometimes variegated. Growers should investigate their invasive potential before using them: they are either clump forming (pachymorph), or have rapidly spreading runners (leptomorph). Less frequently cultivated bamboos (and some available mainly in the tropics) include: Chusquea spp., Dendrocalamus spp., Nastus spp., Otatea spp., Thyrsostachys siamensis, Schizostachyum funghornii, Fargesia dracocephala and F. nitida, Gigantochloa atroviolacea, Indocalamus tesselatus and the form hamadae; Guadua spp. Unfortunately the prolific seed production and sometimes invasive rhizomes make bamboos prime candidates as environmental weeds and some have been declared noxious.

Cereal crops, pasture and wayside grasses: Many exotic grasses have been introduced as cereals and pasture grasses and have escaped to become common roadside and wayside plants often colonising waste and disturbed land. Because they are (or were) elements of the cultivated flora the commoner ones have been described in this account. Examples include: Setaria verticillata, Green Bristle Grass; Paspalum dilatatum, Paspalum; Bromus catharticus, Prairie Grass; Ehrharta spp.; Sporobolus africanus; Holcus lanatus, Yorkshire Fog; Hordeum spp.; Vulpia spp.

Grass identification generally requires a hand lens or microscope as it entails inspection of the details of the spikelet structure, also the texture, shape and nerve number of the lemma and glumes, and the presence or absence of awns.

The botanical classification of Poaceae (also known as Gramineae) is in a state of flux but generally 6 subfamilies are recognised (Arundinoideae, Bambusoideae, Centothethecoideae, Chloridoideae , Panicoideae, Pooideae). The subfamilies are divided into about 40 tribes which, in turn, encompass a number of genera. For example, subfamily Pooideae includes the Tribes Stipeae, Poeae, Meliceae, Aveneae, Bromeae and Triticeae; the tribe Poeae includes the genera Festuca, Dryopoa, Puccinellia, Poa and Austrofestuca.

An economically important family. Cereal grains provide more than 50% of the world's food as, in order of quantity produced Triticum, Wheat; Oryza, Rice; Zea, Maize or Corn; Hordeum, Barley; Avena, Oats; Sorghum; Secale, Rye; millets. Rice is the favoured food in the tropics and subtropics while wheat is mostly a temperate crop. Animals that use plants of this family as fodder and forage produce the bulk of consumed meat; pigs and poultry are fed with cereals. Bamboos are used structurally and for a range of other purposes such as musical instruments and paper production (along with several other grasses). Sugar cane is commercially important and aromatic oils are extracted from some species such as Cymbopogon, Lemon Grass, and Vetiveria (vetiver oil). Alcoholic beverages are made from Oryza (sake), Saccharum (rum), Hordeum, Secale, Triticum and Zea (beer and whiskeys). Turf grasses are widely used in sports fields, arenas and golf courses.

It is important to distinguish between the families Poaceae (grasses), Cyperaceae (sedges), and Juncaceae (rushes), all of which may have grass-like leaves. The sedges, Cyperaceae, have stems that are generally 3-angled and solid with 3-ranked leaves (not 2-ranked as in Poaceae), the leaf sheaths are closed (mostly open in Poaceae); the florets are subtended by a single bract (not 2 as in Poaceae), the fruit is an achene (nutlet) not caryopsis (as in Poaceae). The rushes, Juncaceae, have a 1-3 chambered capsular fruit containing 3-many seeds and generally 6 perianth segments radially arranged (Poaceae has insignificant, asymmetrically arranged perianth segments (lodicules), which are hidden by the lemma and palea).

Key to the genera of Poaceae 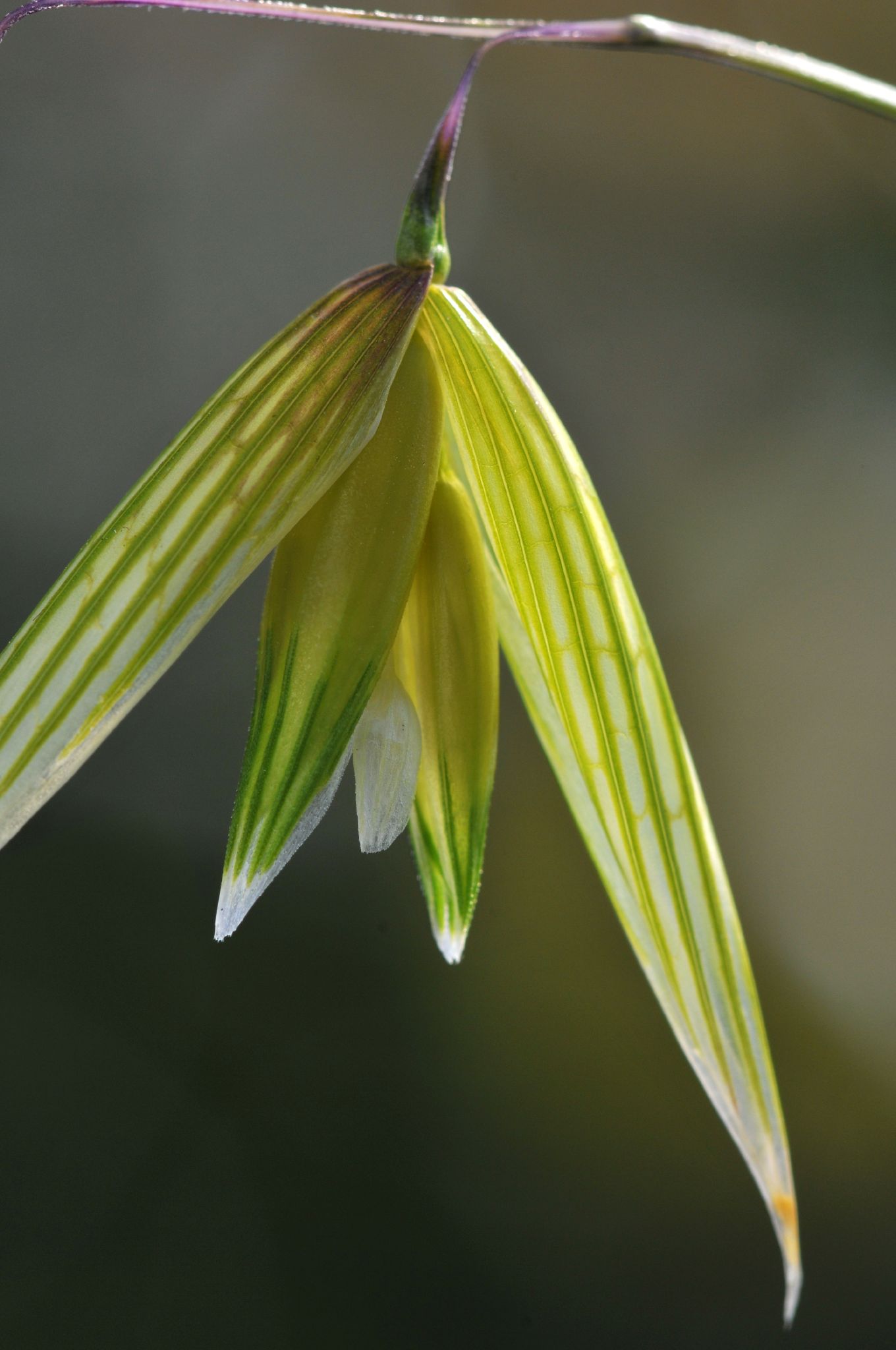