Mostly succulent, leafless perennials. Habit varying from trees and shrubs to climbers and epiphytes but mostly low-growing solitary or clustering stem succulents. Roots fibrous or swollen. Body consisting of a swollen photosynthetic stem (cladode) that is variously shaped, mostly rounded or cylindrical to flattened, ridged or winged, sometimes segmented, generally spiny and often with a warty (tuberculate) or ribbed surface. Leaves, when present, mostly small (except in Pereskia) and insignificant on new growth, soon shed. Most cacti have spines, branches and flowers arising from a cushion or bump called an areole, often arranged in lines along the ribs. Flowers mostly bisexual, solitary, stalkless and radially symmetric, of various colours (never blue), parts not differentiated into petals and sepals. Perianth segments and stamens numerous, spiralling, appearing free or inserted on a perianth tube. Carpels 2-many. Ovary mostly inferior and with a single chamber, ovules numerous with parietal placentation. Fruit a berry, often fleshy, occasionally dry; seeds numerous.

The family has no close relatives but features are shared with Phytolaccaceae, Portulacaceae and Aizoaceae. The prickly pear, Opuntia, is naturalised in Australia where at one time it existed in plague proportions prior to biological control by the Cactoblastis cactorum moth larvae introduced from Argentina as a biocontrol. Relatively few cacti are grown in gardens but their strange forms have great appeal for specialist collectors and growers and there is an enormous range of popular books. The species presented here represent a range of the more popular ones but the demarcation between collectors items and those generally available is especially difficult in this family. Readers should use the keys as a guide only to the species they might find in nurseries. The Cactus and Succulent Society of Australia, based in Victoria, was established in 1927.

The word cactus is best applied to members of this family only usually easily recognised by the presence of spines, although there are many similar looking succulent plants. The family Cactaceae appears most closely related to the Portulacaceae and more distantly to the Phytolaccaceae and Aizoaceae.

Taxonomically the cacti are a difficult group with many species listed under different generic names and many disputed demarcations between species. A working party of the International Organisation for Succulent Plant Study is developing a consensus approach to the demarcation of genera and this is followed in this account (see Bradleya (1986-1991) 4:65-78, 8:85-107, 9:81-92). In many genera, species have been described based on trivial differences and under revision the number is likely to be reduced considerably.

The identification of cacti is difficult and so this introduction and illustrations are given as an overview of their structures and terminology. Cacti generally do not possess leaves, the body being an expanded succulent stem (sometimes flattened and leaf-like) that carries out the photosynthetic functions normally performed by leaves (referred to botanically as a cladode) but, like the stems of other plants, bearing the new shoots and flowers. The cactus body is variously shaped, from spherical to cylindrical or compressed and is often ribbed in some way; there are frequently tubercles, nipple-like or warty protuberances. One important feature of the family are the areoles, cushion-like felty bumps on the surface of the cactus: the areole is regarded botanically as an axillary bud; it is from the areoles that spines, flowers and branches arise and they frequently also carry surface hair of various lengths, sometimes extremely long and woolly. Spines are frequently produced at the areoles and are important for identification, often being divided into central and radial kinds oriented in different ways, with different shapes, texture, positioning, numbers and colours. The finer spines of cacti like Opuntia are sometimes called glochids and, tipped with minute hooks, can stick in the skin causing unpleasant irritation. Flower structure is similar throughout the family although a variety of colours and sizes occur and a distinction is often made between the nocturnal (night flowering, although flowers may remain open for at least part of the following day) and diurnal (day flowering) kinds. As with other families where the distinction between sepals and petals is not clear the petal-like structures are referred to as perianth segments. In most species the ovary is embedded in the fleshy tip of the stem (receptacle). The area surrounding and just below the ovary is called the pericarpel, while the area between the pericarpel and the perianth segments is referred to as the flower tube and is useful for identification because of the scales, bristles, and spines they often bear: when these structures are absent the pericarpel and tube are referred to as naked. The fruit (ovary and receptacle) shape, size and structures may be useful in identification. Seeds offer important technical characters for identification but are not practical for 'field' identification and have been omitted from the text.

Probably the most comprehensive and brief synoptic account of the Cacti in cultivation, from the point of view of identification of species, is Hunt et al. (1989), while the most succinct account to the genus level is by Barthlott and Hunt (1993). Large compilations of colour illustrations are also now available (see literature).

The treatment here has relied substantially on the concepts and delimitations presented in the European Garden Flora account. Keys presented here have been modified from those of this account to deal only with species grown in Australia.

Most genera may be propagated by stem division or by growth of removed segments and also by seed.

Fruits of Opuntia, Prickly Pear, are edible and available in markets and groceries. Other genera with edible fruits are Hylocereus and Stenocereus.

Bendigo Cactus Garden, 571 Napier St, White Hills, Bendigo. The botanic gardens in Adelaide, Sydney and Melbourne all have areas devoted to cacti and their relatives. Collector's Corner at Garden World Nursery at Keysborough, Victoria has a display garden and extensive range of species on sale. Fields' Cactus Farm, Tennyson, Victoria. In the 1930s tAustralia's largest cactus garden, owned by Dawson and Gill, was on a 1-acre block at White Hills in Bendigo, claiming more than 2000 species. now Cactus Country, which opened in 1988, is Australia's largest 12 ha cactus garden in Strathmerton, near Cobram in north-east Victoria and features more than 3000 species. Ralph Field's collection, gathered in South America by German botanist Harold Blossfeld in the 1930s has now been acquired by the Royal Botanic Gardens Victoria and used as the foundation for a new arid garden precinct.

Conservation Many species are under threat especially from agriculture in semi-arid regions. Destruction of the Brazilian rainforest threatens epiphytic cacti and erosion threatens the desert cacti. Commercial exploitation by plundering species in the wild remains a major threat and for this reason the entire family is protected under the Convention of International Trade in Endangered Species (CITES) (see Hunt, 1992).

This key to the genera of cacti is modified from that in S.M. Walters et al, European Garden Flora Vol. 3 (1989) and Barthlott and Hunt (1993). Although, for ease of use, vegetative characters are used for initial groupings, differences between genera are inevitably based mostly on structures of the flower and fruit. Note that mature specimens may be considerably larger than the small pot plants purchased in shops.

Key to the genera of Cactaceae 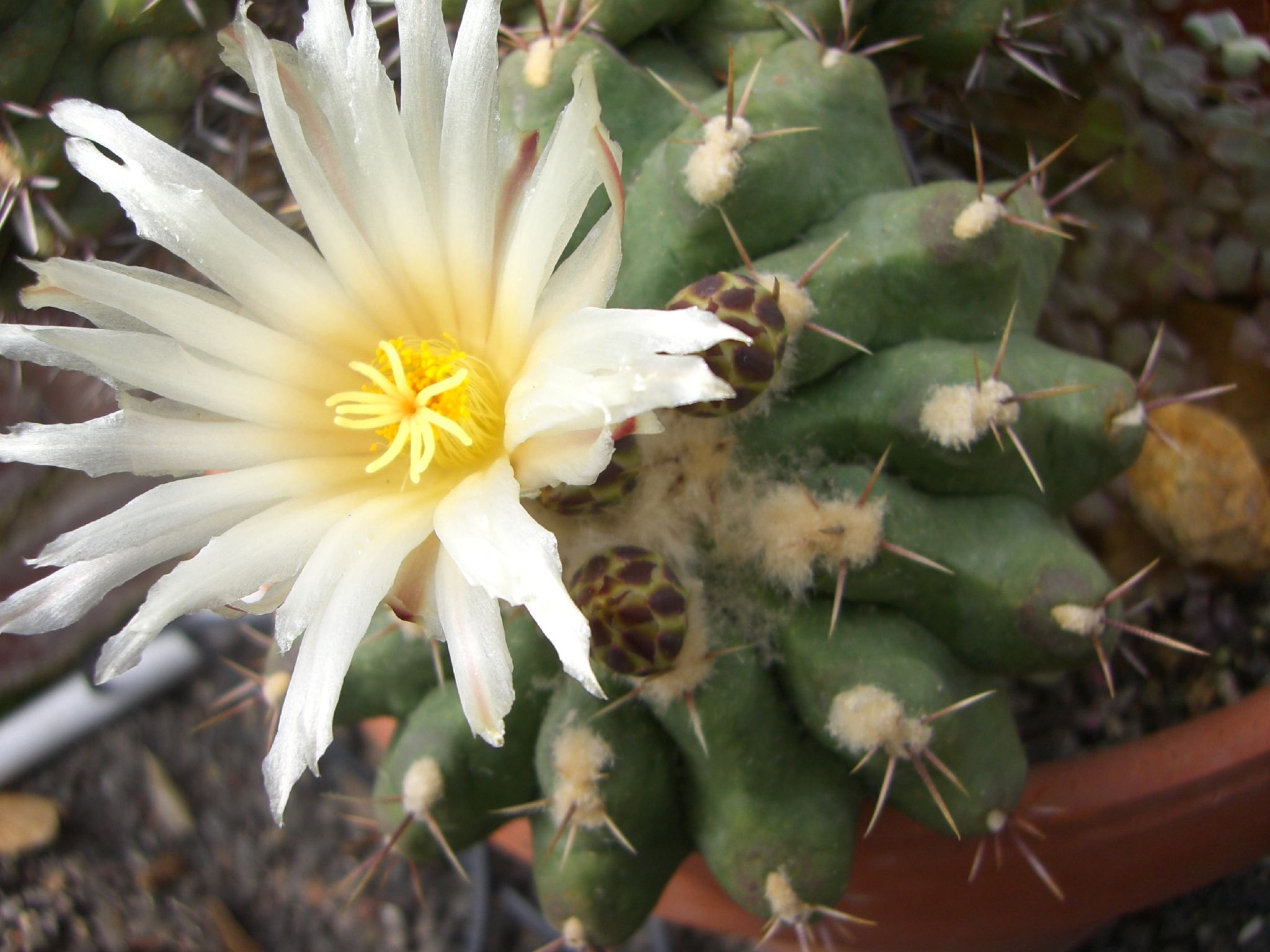