Araucanos - name of  Chilean Indian tribe in region where A. araucana was discovered.

Evergreen, mostly resinous trees which, when older, tend to lose the lower branches. Branches whorled, usually horizontal or slightly ascending, leaving persistent scars when shed. Buds consisting of a few scales. Leaves spirally arranged, without stalks or midribs, leathery, mostly either small, tapering, and spiny or broadly triangular to lanceolate, varying in size and shape on different parts of the same tree. Male and female cones generally produced on the same tree. Male cones solitary or clustered, cylindrical, generally drooping from the tips of the branchlets in the central part of the canopy. Specimens in cultivation often produce male cones irregularly from spring to autumn. Female cones globose to ovoid, scales leathery to woody, mostly spiny and each generally with a single winged seed attached to the cone scale (except a. bidwillii). The cones ripen in 2-3 years and may be clearly seen in the uppermost branches (occasionally extending into mid or lower canopy) in Mar.-Apr. before falling apart when the seeds mature in mid to late summer.

All cultivated species have a formal architecture that makes them strong landscape plants that have been used from the earliest days of colonisation in Australia and are widely planted in large parks and gardens and occasionally used as pot or tub plants. Araucaria heterophylla, Norfolk Island Pine, is a feature of many coastal towns.

19 species of the Southern Hemisphere from tropical to warm-temperate forests, mostly Oceania, with a centre of diversity in New Caledonia (13 species endemic) E Australia (2 species NSW & Qld), S.America (2 species - A. araucana in S & C Chile, A. angustifolia in S Brazil & N Argentina), New Guinea, New Hebrides, Norfolk Island (1). Two species are native to Australia, A. bidwillii and A. cunninghamii which grow naturally in moist forests, often rising above the main canopy and colonising disturbed sites. The most widely cultivated is A. heterophylla which is indigenous to Norfolk Island. The distribution of this genus shows a strong Gondwanan affinity.

Seed or occasionally cuttings of erect, not lateral, shoots. Seed is viable for only a few months at room temperature but this period can be extended to several years when stored at about 4°C, although germination may take several years.

At the Waite Arboretum, Adelaide, 9 species of mature trees were in cultivation in 1989. At the Royal Botanic Gardens, Melbourne A. muelleri (Carriere) Brong. & Griseb. from New Caledonia, grows on the Hopetoun Lawn. Araucaria hunsteinii K. Schum. is native to New Guinea where it is exploited for its timber: it must be one of the tallest growing tree species in the world with specimens recorded at 89 m: a specimen may be seen at the Royal Botanic Gardens, Sydney. In 1991 the Tasmanian Arboretum recorded 11 species, and in Victoria the Otway Ridge Arboretum recorded 17 species. A specimen of A. scopulorum de Laub. is growing at the Tasmanian Royal Botanic Gardens. At the Royal Botanic Gardens Melbourne, near the Temple-of-the-Winds, there is a fine 15 m tall specimen of A. laubenfelsii Corbasson with extraordinary pendulous arching branchlets upturned at the tips. This is probably one of few of these remarkable trees in cultivation. Acquired by the Royal Botanic Gardens, Melbourne as A. rulei F. Muell., it was tentatively identified by Dr Laubenfels as this species. Another similar specimen may be seen at the old Coles Nursery site, Belgrave, although this could be a different species. It is possible that both of these trees have retained juvenile or intermediate leaves on large trees, a feature that complicates identification. The New Caledonian Araucaria rulei F. Muell. is listed in nineteenth century nursery catalogues but no mature cultivated specimens have been identified with certainty. This species was discovered by Mr. W.Duncan, a botanical collector for Mr John Rule of Rules Nursery in Richmond, Melbourne. It was described by Mueller, with the epithet commemorating the nursery proprietor. Young specimens about 2 m tall and showing the typical robust mature foliage, somewhat intermediate between A. columnaris and A. araucana can be seen at Geelong Bot Gds (planted in 1984 to commemorate the 150th Anniversary of Victoria). At the Royal Botanic Gardens, Melbourne there is a specimen on the Tennyson Lawn and several have been planted near the kiosk, one in 1983 by Premier Cain, to mark the end of the Save the Lake campaign. Specimens of many species were introduced as seed from a collecting expedition in New Caledonia in 1987 and dispersed to various sites in South Australia, Victoria and New South Wales.

Araucaria columnaris, A. cunninghamii and A. heterophylla cannot be easily distinguished by leaf characters. However, each species has a distinctive habit and cones. The characteristic mature habits of the 4 commonest cultivated species can be compared in the city centre of Perth in the parkland at the corner of Barrack Street and St Georges Terrace and in a fine avenue at Adelaide Botanic Gardens.

Key to the species of Araucaria 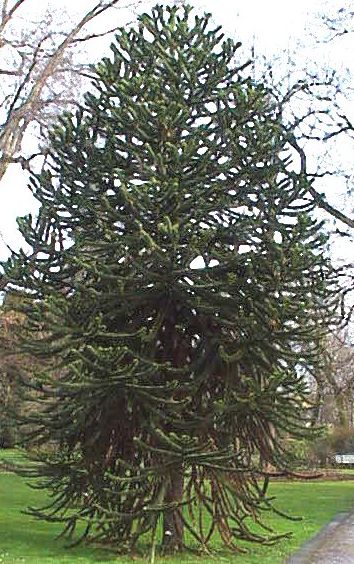