Herbaceous annual, biennial or perennial herbs with hollow stems, sometimes creepers, occasionally woody, a few spiny and thistle-like (e.g. Eryngium). Leaves alternate, generally deeply dissected or pinnate, occasionally entire; stipules absent. Flower clusters simple or compound umbels (mostly flat-topped, with the stalk length bringing all flowers to the same level), rarely flowers solitary or forming a head (see illustration below). Bracts occur at the bases of the umbels. Flowers open from the outside of the cluster inwards, with the stamens maturing before the ovary. Sepals 5, small, reduced. Petals 5. Stamens 5, free. Ovary inferior. Carpels 2, with 2 chambers, each containing a single ovule. Fruit mostly a dry schizocarp that splits into 2 parts, each with 1 seed, the outer surface generally with 5 ridges that may be variously modified to assist dispersal.

A family with many long-domesticated species that have been used since classical times. Rare in the tropics where it is replaced by the extremely similar but mostly woody family Araliaceae. These 2 families may be united in future. Many species are prolific seeders and show a tendency to become weedy.

Rarely cultivated plants, many of which are traditional herbs, include the following. Aciphylla monroi Hook. f., is a small, tufted plant from New Zealand, as is the prostrate Anisotome procumbens (F. Muell.) C.Webb [Aciphylla procumbens F. Muell.]; both are grown in cool-climate gardens for their spiky leaves and broad flower spikes. Anthriscus cerefolium (L.) Hoffm., Chervil, is an annual to about 30 cm tall, grown for the leaves which are used in salads and as a garnish. Crithmum maritimum L., Samphire, from coastal Europe has compound leaves with fleshy linear leaflets and may be encountered in herb gardens; the new shoots are edible as a kind of spinach. Carum carvi L., Caraway, is a traditional herb grown for the edible fruits. Conium maculatum L., Hemlock (Poison Hemlock), from Europe is not recommended for the garden as all parts of the plant are very poisonous and may be fatal if eaten by humans or animals. It is, however, occasionally grown in herb gardens, as it has medicinal properties. Seeding freely, it is naturalised on disturbed sites, often near stockyards, roadsides and riverbanks in SA, Qld, NSW, Vic and Tas. A biennial herb flowering in spring that grows to 2 m or so tall, it is easily recognised by the hollow stems spotted reddish brown or purple. Cuminum cyminum L., Cumin, is a traditional herb, the fruits of which are used for flavouring foods and a liqueur. Ferula assa-foetida L., Asafoetida, from W Iran produces a gum resin and is occasionally grown in herb gardens. Heracleum is grown occasionally as a large border plant for its strong architectural form, although several species have proved weedy in many parts of the world; species include H. sphondylium L. subsp. montanum (Gaudin.) Briq. and H. montegazzianum Somm. & Lev. Myrrhis odorata Mill., Sweet Cicely (Garden Myrrh), is a traditional pot herb occasionally used medicinally or as a flavouring. Oenanthe pimpinelloides L., Water Dropwort, is occasionally grown in herb gardens and is naturalised in SA and Vic. Pastinaca sativa L., Parsnip, is a biennial herb to over 1.5 m tall that has become naturalised in SA, NSW, Vic and Tas. Listed cultivars include P. 'Cobham', P. 'Hollow Crown', P. 'Hollow Crown Imp', P. 'Melbourne Whiteskin', P. 'Smith's Strongtop', P. 'White Gold Hybrid' and P. 'Yatesnip Number One'. Pimpinella anisum L., Common Anise, is an aniseed-smelling traditional herb used in medicine and cookery. Platysace lanceolata (Labill.) Druce, Shrubby Platysace, from Qld, NSW and Vic has entire lanceolate leaves; it is variable and a large-leaved form is in cultivation. Smyrnium olusatrum L., Alexanders, from W Europe is an edible plant with celery-like leaves and parsnip-like roots. Trachymene coerulea Graham, Blue Lace Flower, is an attractive annual native plant from WA to about 40 cm tall with pale blue flowers. Xanthosia rotundifolia DC., Southern Cross, from WA has white flowers arranged in a distinctive cross; it is occasionally grown in warm, dry areas.

One of the most important families economically, being the source of foods, spices, herbs, medicines, gums, resins (Ferula assa-foetida), poisons and perfumes. Many species are used as herbs in cooking and grown commercially, but rarely in the home garden; among these are anise, caraway, chervil, cumin, coriander, dill, fennel and unusual parsley cultivars. Several species have been used as food although Daucus carota, Carrot, is the only major food crop. Other plants that may be eaten include: Carum carvi, Caraway, the seed being used in bread, cheeses, etc. and in the liqueur Kümmel; Crithmum maritimum, Samphire, as boiled new shoots; Cuminum cyminum, Cumin; Pastinacea sativa, Parsnip; Angelica archangelica, Angelica; Apium graveolens, Celery; Levisticum officinale, Lovage; Foeniculum vulgare, Fennel; and Pimpinella anisum, Common Anise.

About 431 genera with 3700 species; cosmopolitan but mostly from temperate high country. Australia has 42 genera and about 200 species.

Key to the genera of Apiaceae 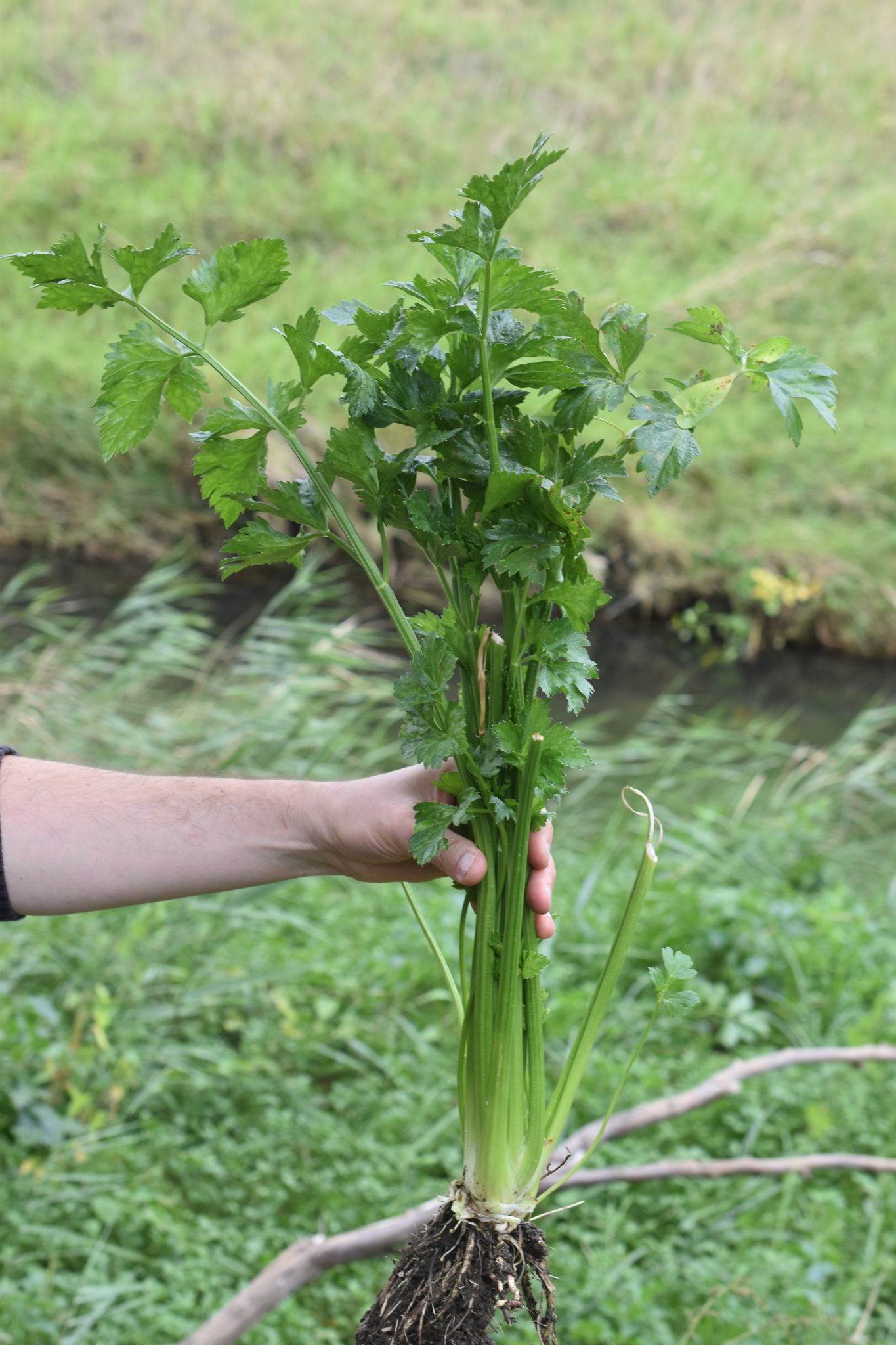