Latin campana — bell, referring to the characteristic shape of the flowers.

A popular and variable genus in the northern hemisphere, where many species are grown as border plants. Plants from montane habitats are grown widely in rockeries and hanging baskets; they are not so popular in Australia and are largely confined to cooler districts, where they appeal to specialist growers and collectors.

A number of small, tufted montane species are popular for the alpine and rock garden and include the following from the Caucasus Mountains: C. alliariifolia Willd., a hairy plant with pendulous flowers and hairy stems; C. alpina Jacq., with linear to lanceolate leaves and pale to deep blue flowers; C. aucheri A. DC., with oblong to spathulate leaves and deep blue to violet flowers (C. saxifraga Bieb. is similar but with greener foliage); C. collina Bieb., with downy leaves and pendulous, deep purple flowers carried on one side of the stem; C. kemulariae Fomin, with upper leaves cut and flowers blue to pale lilac; C. raddeana Trautv., with pendulous, deep violet-purple flowers with hairy-edged calyx lobes; and C. sarmatica Ker Gawl., with flowers on one side of the stem, grey-blue and bearded inside.

C. cochlearifolia Lam., Fairies' Thimbles, is a creeping plant with solitary, terminal, pendulous, blue, lilac or white flowers, while C. elatines L. is a silky-hairy, compact, low perennial to 15 cm tall, with dense masses of starry flowers. The similar C. garganica Ten. is grown mostly as the cultivar 'Hirsuta', which has hairy greyish flowers. From montane Norway there is C. barbata L., Bearded Bellflower, which has hairyedged corolla lobes on lavender blue flowers, while C. lanata Friv. from N Greece has a dense covering of hair on leaves and also on the cream to pink flowers.

A variable range of species is available, making a key impractical.

C. rapunculus has roots and leaves that are occasionally used in salads; C. allionii and C. linifolia are used in the liqueur Chartreuse; a few other species have edible parts or are sources of medicinal extracts.

About 300 species from northern temperate areas, especially montane Europe and the Mediterranean. 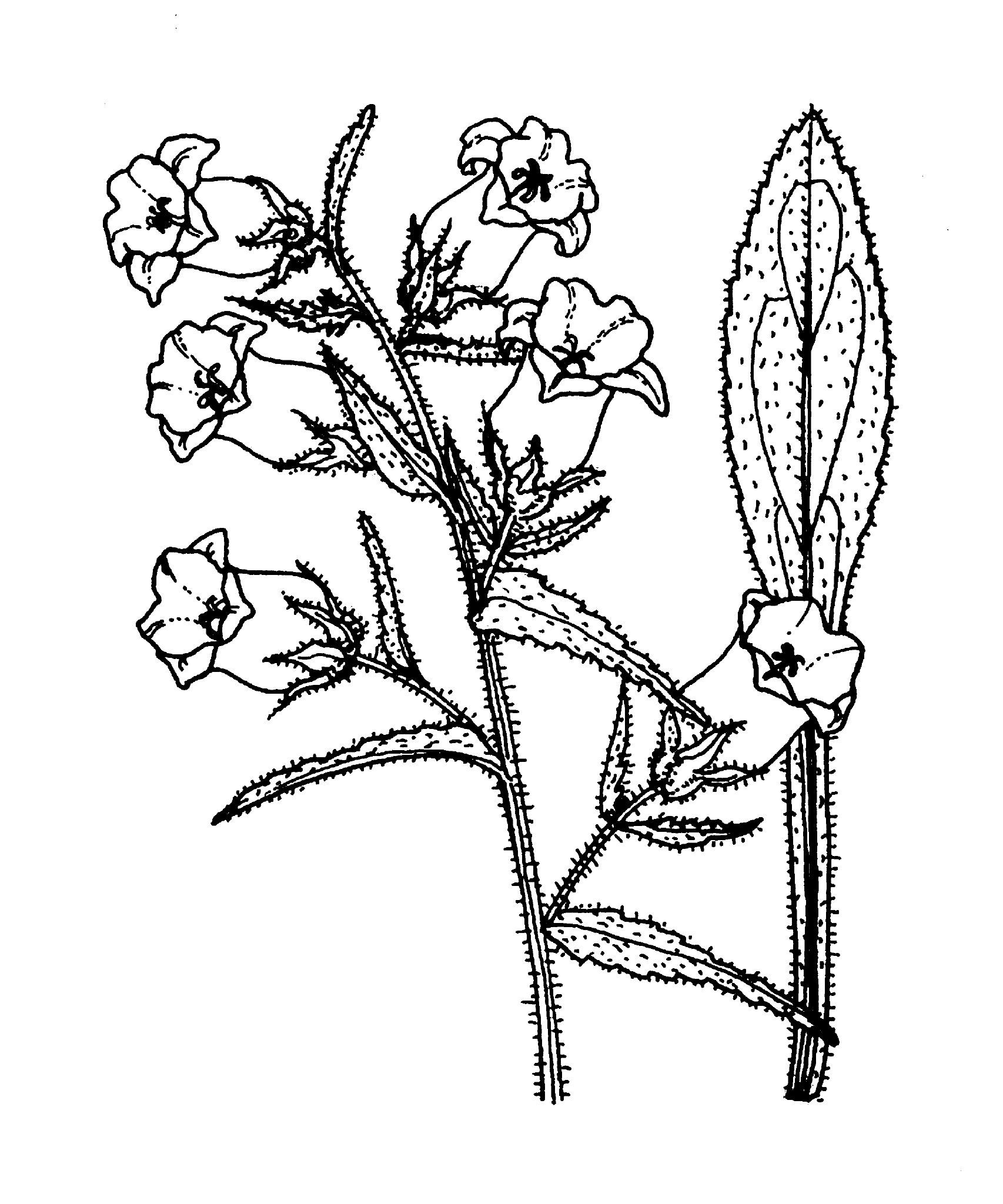 An old hybrid, the origin and history of which are lost.

A low, broad plant with flowers that are bright blue and star-shaped, with deeply divided lobes and a pale centre.

A presumed hybrid but of uncertain origin.