Small broad-crowned tree to about 5-7 m tall with thin red twigs. Bark green to grey but variable in cultivars. Leaves with blades 5-10 cm wide with 5(7-11) lobes, each cut more than halfway (further in most cultivars) with the central one longest; margins finely double-toothed and with hair tufts in the vein axils below; orange-red in autumn. Leaf stalk 3-4 cm long, swollen at the base, often red. Flowers in small purple clusters; Sept-Oct. Fruit with wings widely spread, to about 1-2 cm wide, brightly coloured on cultivars.

Widely cultivated with numerous cultivars supplied by specialist nurseries in a multitude of different leaf shapes and colours.

Leaves typically 5-lobed and double-toothed, the lobes with tapered tips.

Cultivars: The cultivars are sometimes split into 2 groups: the Palmatum group, with 5-7-lobed leaves like those of the species, and the Dissectum group, which includes all those with 7-11 slender, deeply dissected lobes cut almost to the base of the leaf blade. The cultivar groupings used here follow Vertrees (1987) and van Gelderen et al. (1994).

GROUP 1 PALMATUM Upright shrubs or small trees. Leaves with 5 lobes (rarely 7, the 2 additional lobes small) like those of the species. Fruits small to medium-sized.

GROUP 2 AMOENUM Upright shrubs or small trees. Leaves with 7 or occasionally 9-lobed leaves cut to half the depth of the blade or slightly more. Fruits medium to large, often red and in clusters.

GROUP 3 MATSUMURAE Mostly broad shrubs. Leaves with 7 lobes (rarely 9) cut almost to the base, the margins saw-toothed or cut.

GROUP 4 DISSECTUM  Mostly mushroom-shaped shrubs less than 4 m tall. Leaves 7-lobed, the lobes cut to the base and saw-toothed, sometimes quite deeply, to give the leaves a 'ferny' appearance characteristic of the group.

GROUP 5 LINEARILOBUM Upright slow growing shrubs to about 4 m tall but generally smaller. Leaves 7-lobed, the lobes narrowed to the main vein (or nearly so) and deeply divided to the base.

GROUP 6 DWARF (BONSAI, PENJING) Dwarf cultivars used for bonsai/penjing, tubs and pots. Mostly less than 1 m tall, slow growing, with small leaves. The small habit with tiny leaves condensed on the branches may be the result of selection from witches' brooms. 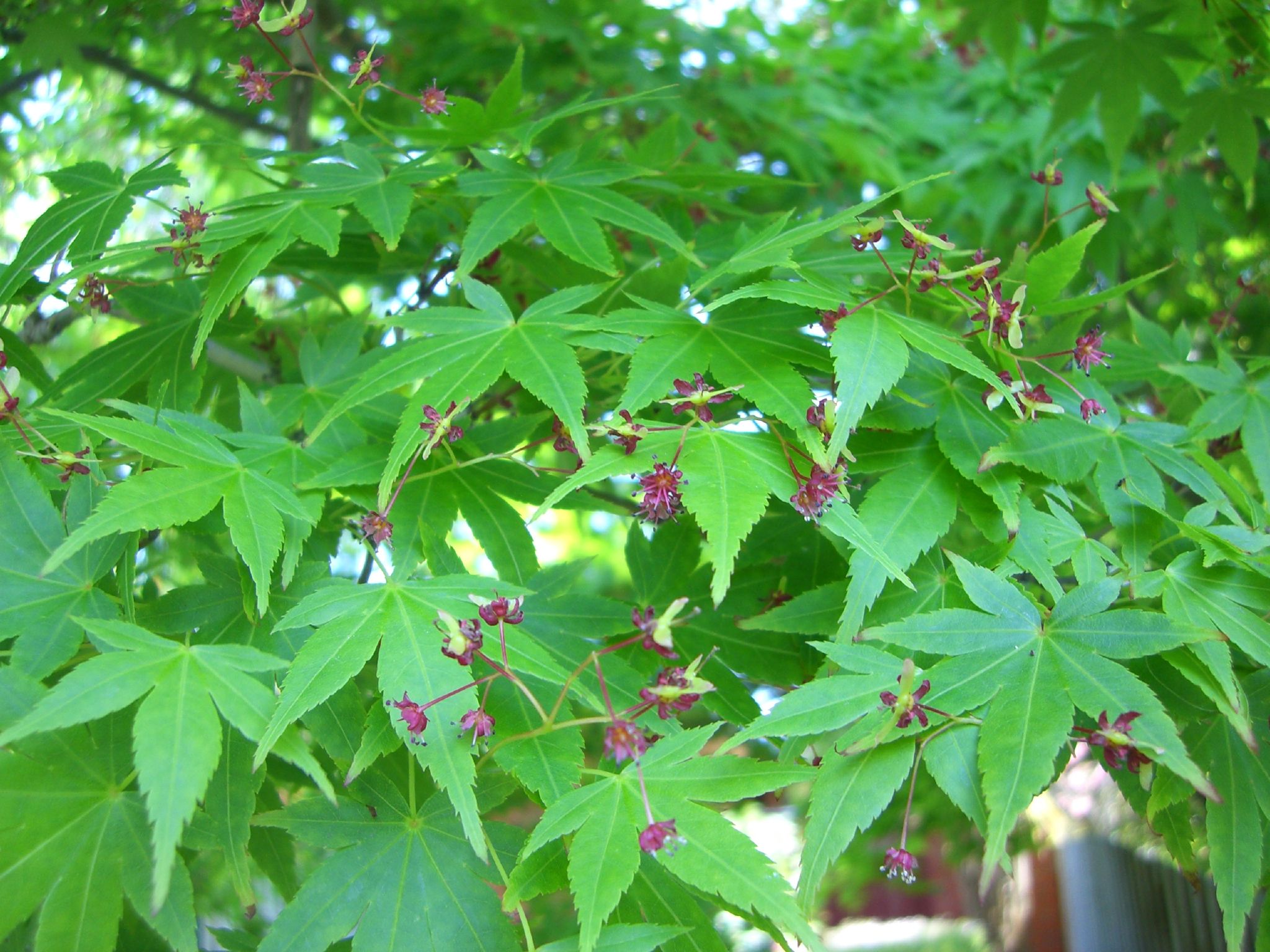 Leaves bright red at first, divided almost to the base to form widely spread lobes, the lower ones facing downwards. The colour changes to green in summer before becoming scarlet in autumn.

Shrubs eventually to 5 m or so tall. Leaves deeply dissected, serrated along the length of the margins, becoming green late in the season. Raised in usa, c. 1950.

Australian-raised. A witches' broom sport with yellow, not white, variegation.

, Purple Weeping Japanese Maple. A name believed to cover a range of purplish red-leaved clones in the Dissectum Group and best discarded. The name 'Ornatum' is now used although the exact application of this name, in turn, is not certain.

A widely used name but the distinction between this cultivar and 'Dissectum' is not clear.

Similar to 'Crimson Queen' but a large shrub with less dissected leaves. Discovered by Messrs Guldemond, Boskoop, Holland, as a chance seedling and int. c. 1959.

Leaves divided almost to the base with narrow, widely spread lobes. Purplish in spring, turning green before becoming brilliant orange to yellow in autumn. Selected and named by j.d.Vertrees, c. 1970.

Extremely slow growing. Leaves small, similar in shape to typical a. palmatum. B.

Large shrub to 4-5 m tall, branches slightly pendulous. Leaves bronzish when opening, becoming green before turning a spectacular crimson in autumn. Lobes saw-toothed but not so deeply as other members of the group. 18th century, Japan.

Medium-sized shrub with deeply cut leaves that are purplish at first, becoming golden or crimson in autumn. Japan, 19th century.

Shrub to 5 m tall. The leaves 5-lobed with 2 additional small lobes. Leaves maintaining their dark purple colouration and with a white pubescence when young.

Small tree, sometimes grown as a standard, with semi-pendulous branches. Leaves orange at first, becoming green before changing to crimson and gold in autumn. Japan.

Similar to 'Ornatum' but with pendulous branches, less divided leaf lobes and orange-yellow foliage in autumn. May be grown as a standard. Japan.

Slow growing and sometimes used effectively as a grafted standard. Leaves with the most finely and narrowly divided lobes within the group. Arose as a chance seedling found by nurseryman,w. Curtis. After being grown by a number of nurseries it was finally int. by Jean Iseli, nurseryman of Boring, Oregon.

Although placed in the Dissectum Group, this cultivar is an exception in that it is a small tree with an upright habit and growing to 5 m or so tall. Leaves dark green, becoming brownish purple in autumn. Japan, 19th century.

Low shrub. Leaves large, dark green, with slightly less dissected lobes than other members of the group. Also characterised by its yellow autumn foliage and white-flecked bark. May be grafted as a standard. Japan, 18th century.

A large shrub similar to 'Burgundy Lace' but retaining its colour through the season. A chance seedling of 'Burgundy Lace' raised in the usa by Will Curtis and int. c. 1970.

Upright shrub to small tree. Leaves opening dark purple, becoming brownish red until in autumn the colour turns to scarlet. A characteristic of this cultivar is the tendency for the leaf lobes to fold under and become almost tubelike. A chance seedling discovered by j. van Hoey Smith and named after his arboretum. Int. by c. Esveld, Boskoop, Holland.

Small shrub to 2 m or so tall, useful for bonsai. Leaves with irregular white and pink patterning. Japan.

Small upright bush to 2 m or so tall. Leaves with 5 linear lobes that are reddish orange at first, becoming green and eventually bright yellow in autumn. Similar to 'Red Pygmy' except in leaf colour. Discovered in the gardens of Villa Taranto, Pallanza, Italy. Named and int. by c. Esveld, Boskoop, Holland, c.1967.

The distinction between this plant and 'Dissectum' is not established. 'Waterfall' may well be a commercial name with no botanical standing. Int. Usa, c. 1920.