A tree growing to 35 m tall in cultivation and extremely variable in habit, ranging from columnar or fastigiate, as in the cultivar 'Fastigiata', to widespread and flat-topped with sweeping lateral branches like the Cedar of Lebanon, as in the cultivar 'Horizontalis', better known as Lambert's Cypress. Bark brown to almost white on old trees and shallowly ridged. Sprays pale green and distinctly lemon-scented at the tips when young but becoming darker and weaker scented with age. Leaves 1-2 mm long, blunt and swollen towards the tip. Male cones about 5 mm long, at tips of the branchlets, produced Oct-Apr. Female cones 2-3 cm wide, more or less spherical; scales 8-12. Seeds slightly warty.

Extremely rare in the wild where known from only two localities in a 3-4 km strip along the rocky Monterey County coast, California. A widely cultivated tree, especially in Australia and New Zealand where several cultivars have originated, but also commonly cultivated in the temperate zone in public parks, gardens, cemeteries and farms although the species is now being replaced by its cultivars. Monterey Cypress appeared in Victorian nursery catalogues as early as 1857 and 1860 and was soon widely available. It is grown mostly for shelter and the widespreading cultivar 'Horizontalis' is used mainly as a windbreak. Together with the Monterey Pine, Pinus radiata, Monterey Cypress is a strong landscape element in many country areas of south-eastern Australia, the success of these two conifers being no doubt due in part to their origin from a similar climatic zone. In Victoria the cypress is a feature of the Western District, the plains west of Geelong, the Mornington Peninsula and elsewhere but the Canberra climate appears to be unsuitable. Occasionally it is used as a hedging plant that can be clipped into various shapes as topiary. Examples of fine hedges in Victoria can be seen at the Ashcombe Maze on the Mornington Peninsula, and a large hedge with the property name 'Plainbrook' clipped into it and clearly visible from the Princes Highway about 16 km west of Winchelsea, similarly at 'Coombe Cottage', Coldstream. Sometimes effective use of this cypress has been made for coastal planting as, for example, in Victoria the main avenues through Cowes, old plantings at Queenscliff, and seaside avenues at Apollo Bay and Lakes Entrance planted c. 1905. Unfortunately older trees have developed a reputation for dropping large branches. Naturalised on both the North and South Islands of New Zealand. 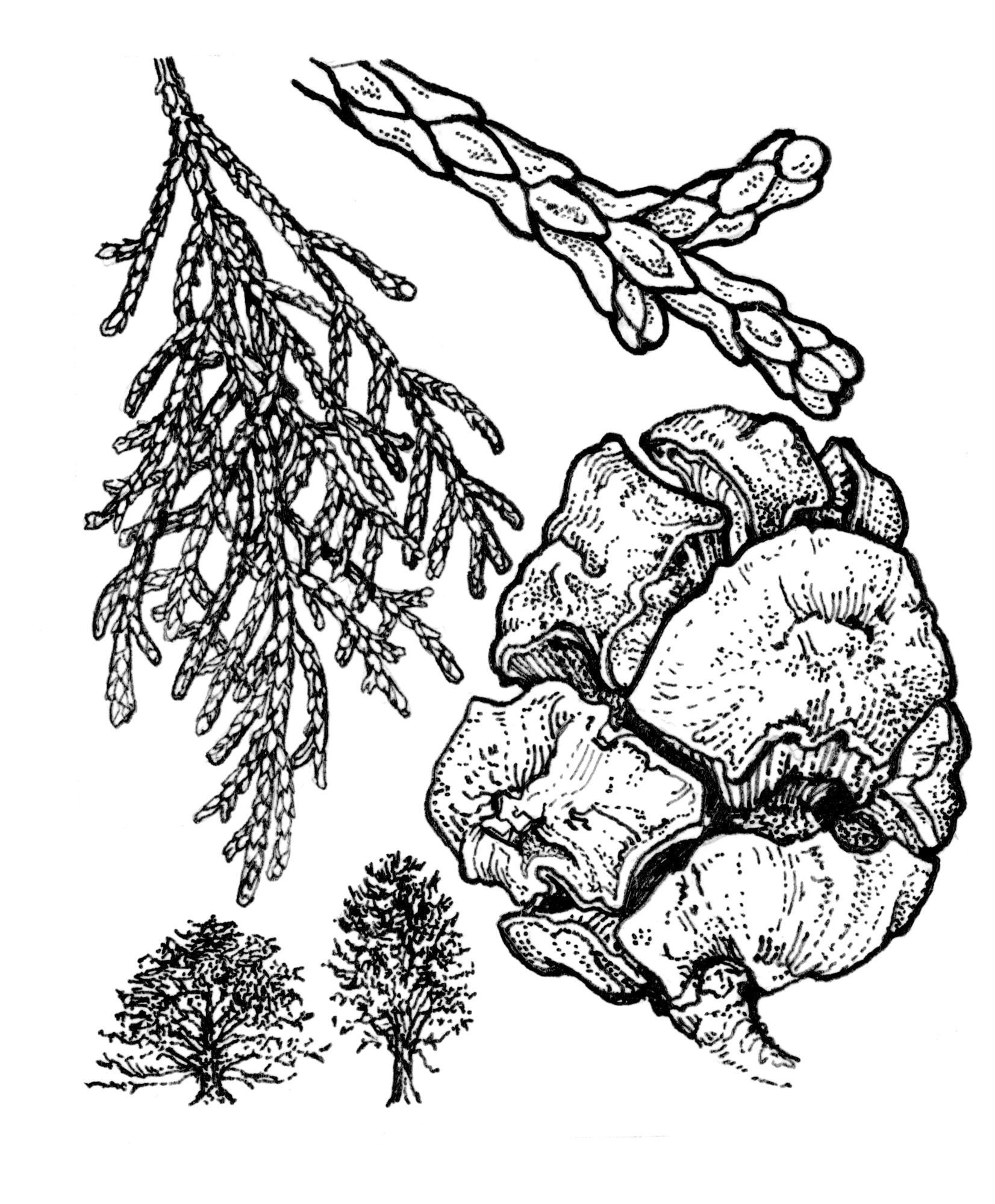 Prostrate with deep green, compact foliage. Found as a witch's broom by p Nitschke &r. Radford at Beaufront Estate in the Midlands, Tasmania and introduced in 1983.

A white variegated form of 'Brunniana Aurea' showing its variegation best when grown in some shade. Grows about 6 m in 10 years. Discovered by John Emery, Australia.

Weeping tree, sparsely branched, branchlets long and thin, whiplike, yellow. Most impressive as a large tree but the foliage tending to revert to green. This is possibly also sold and listed under the names 'Aurea Saligna', 'Coneybearii', 'Filipendula' (often described as a green form of 'Conybearii'), 'Pendula Aurea', 'Pendula' and 'Saligna Aurea'. Research is needed to ascertain whether this was raised from seed at Woolrich Nsy, Olinda, Victoria in 1920s and introduced by Hazelwood Bros, Epping, New South Wales, 1933. The original plant was probably purchased by a Dr Coneybear in the 1920s.

Branches almost upright forming a large columnar tree. A few old trees remain but this cultivar is no longer available. The name is probably best regarded as a group name for a range of fastigiate clones. Introduced to uk by Lambert in 1938 but occasionally arising spontaneously from seed batches.

('Aurea', 'Lambertiana Aurea') a golden variant of 'Horizontalis'. 'Aurea' is an illegitimate name used for a clone derived in Australia from a tree originally known as C. lambertiana 'Horizontalis' (see 'Horizontalis'). It is now correctly listed as C. macrocarpa 'Horizontalis Aurea', a large tree with widespreading tiered branches and widely grown as a windbreak, especially in country areas. The Australasian of June 16 1883 reports this cultivar as introduced by Charles Wyatt's Nursery, Geelong; it is not clear if the cultivar originated from this nursery.

(C. lambertiana Gordon, 'Lambertii') Sometimes known as Lambert's Cypress this is a variant with widespreading horizontal branches in tiers of foliage reminiscent of the Cedar of Lebanon. T. Adcock's Nursery, Geelong, Victoria and J. & J. Rules' Nursery of Richmond, Melbourne, both stocked plants under the name Cupressus horizontalis in 1857 but the name may have originated before then. Widely planted as a windbreak.

('Mangalore') Similar to 'Beaufront' but branches slightly upright and foliage not quite so dark. Found as witch's broom at Mangalore, Tasmania by Ron Radford and Peter Nitschke and introduced c. 1981.

Described as golden in the first year only and with yellow cones. Large, mature specimens at Melbourne's Botanic Gardens labelled as this cultivar have pale lime-green foliage but the cones are not yellow. It is possible that some reversion has occurred on aging specimens. Dickson's Nsy, Chester, UK in the 1890s.