Naturalised locally in WA and SA.

Rosemary has been in cultivation for centuries and several wild forms have been brought into cultivation. It is easy to grow and tolerant of drought. Plants sold as Rosemary, without further qualification, are erect, branched shrubs to 2 m tall with leaves about 2-3 mm wide and greyish (slate blue) flowers. Other growth habits, largely genetically controlled, develop because young plants send up several vertical shoots which may stay erect and form a fastigiate shrub useful for hedging, or bend under their own weight after they reach a height of up to 1 m, in which case they form a sprawling shrub which self-layers. This type of growth is rather misleadingly termed 'semi-prostrate'. Some plants produce shoots so weak that they ascend for only a few centimetres and the result is a prostrate shrub. These plants are particularly suited to growing over rocks or walls. In the truly fastigiate shrubs, the axillary shoots are slow to develop beyond the 4-leaf stage and flowering is consequently delayed.

This widespread, variable species has been divided by botanists into several varieties which correspond to geographic distribution, leaf width and growth habit, and several forms based on flower colour and growth habit. Some of these botanical names have persisted as cultivar names. The variations in growth habit and flower colour have been given simple descriptive names in Australia, e.g. 'prostrate', 'semiprostrate', 'white', 'pink', 'blue'. Particular selections have been sold under promotional names, e.g. Blue Lagoon. A number of plants are available as named cultivars which originated in Britain or the USA. Some of these are correctly named; there is doubt about others. There are dozens of English and American cultivars and it is expected that more of these will be imported either as ornamentals or for oil production.

The fragrant shoots have been used as a culinary herb, air freshener and medicinal herb. Once considered a cure for poor memory, thus becoming a symbol of remembrance; it was once distributed at weddings and funerals and is now worn on ANZAC Day.

Calyx covered with star-shaped hairs but lacking the simple unbranched hairs that are characteristic of the other species, which are probably not grown in Australia. Plants labelled R. lavandulaceus seem always to be prostrate selections of R. officinalis.

Rosemaries now available in Victoria are listed under the Cultivars tab. The confusion over the names of the semi-prostrate, blue-flowered Corsican plants cannot be sorted out until a good collection of rosemaries is available. In addition to the cultivars are the following promotional names in the trade.

Blue Lagoon A long-standing promotional name for a semi-prostrate Rosemary with narrow leaves (1-2 mm) and deep (China) blue flowers. It is the most commonly grown ornamental Rosemary in Vic. Its origins lie in the blueflowered Corsican rosemaries grouped under var. angustifolius. It may be the same as 'Collingwood Ingram'.

Gallipoli is a promotional name for a selection of Rosemary growing wild at Gallipoli in Turkey. It has the growth habit and slate blue flowers of wild plants.

A similar species to Rosmarinus officinalis is R. eriocalyx, which occurs in Spain and neighbouring North Africa; it has calyces with both simple and star-shaped hairs. 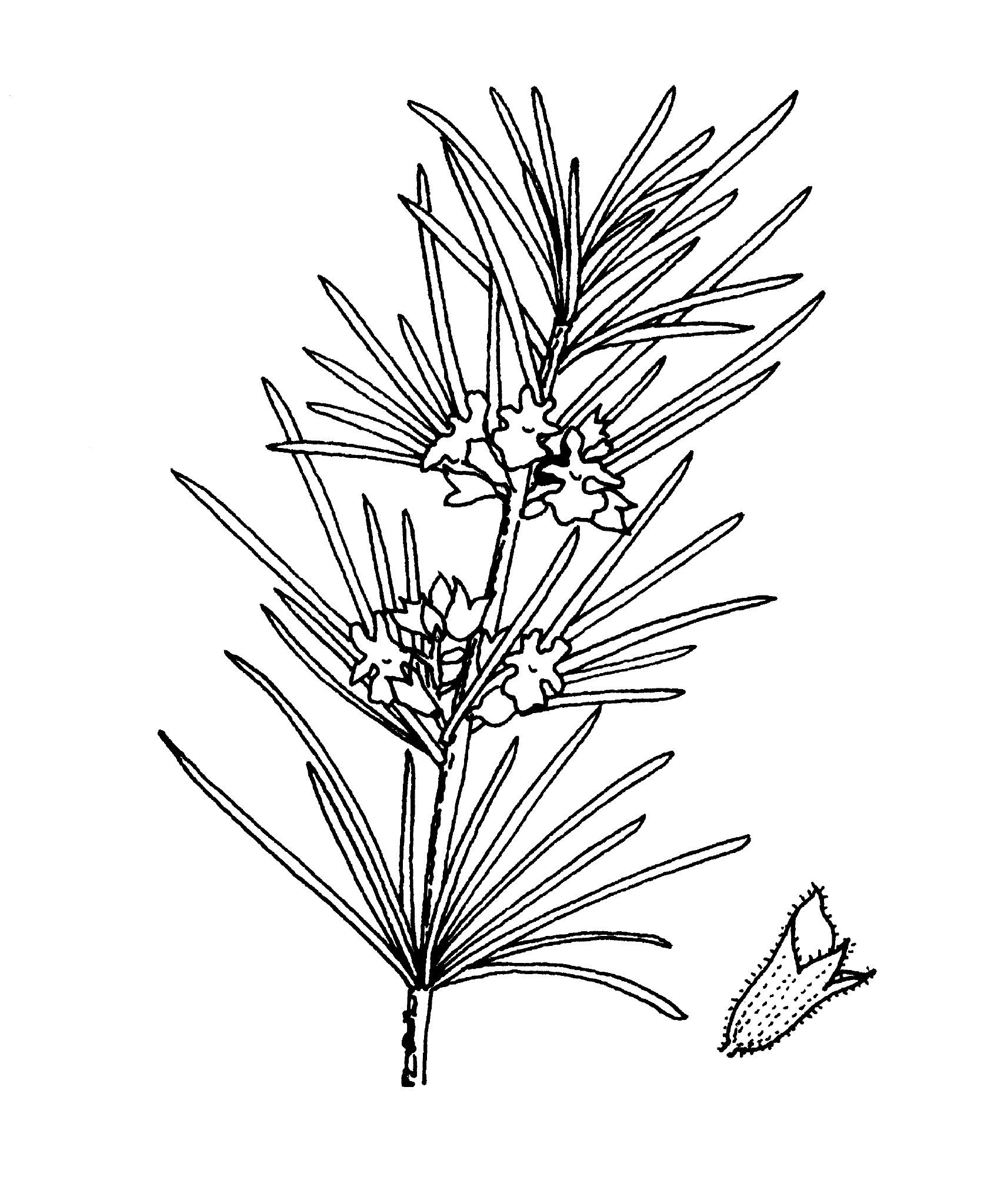 A botanical name given to selections with near-white flowers. The shrubs are usually erect and the flowers are faintly tinged pink or blue where the deeply coloured spots and stripes are usually located.

The cultivar name that has been used for the Rosemary sold in Australia under the promotional name Blue Lagoon. However, there is some doubt as to whether the two plants are the same.

Int. Jackman's Nsy of Woking, uk, as Rosmarinus corsicus. Treseder Nurseries listed this plant as 'Benenden Blue'. Rosemary under the name 'Corsican Blue' was sold in Vic about 20 years ago. Whether this was the Jackman's plant is unknown.

Plants under this name have been known for many years. It is similar to 'Genge's Gold'. The particular chimaera that produces the variegation probably recurs. The relative width of the cream and green zones would be expected to vary. Limited observation suggests that 'Guilded' has a wider cream zone but the difference may not be consistent. The plant described in Parkinson's herbal of 1629 as gilded was flecked with gold and cannot be this plant. ['Gilded']

A name once used in Australia, erroneously, for a pale blueflowered, prostrate Corsican Rosemary which differs from the hybrid, r. _lavandulaceus (r. eriocalyx _ r. officinalis), in lacking long simple hairs on the calyx. R. eriocalyx, a species which occurs in Spain and n Africa, is probably not cultivated in Australia and r. lavandulaceus is sometimes treated as a distinct nonhybrid species.

This has narrow leaves and pale blue flowers and is described as prostrate. Material imported from New Zealand under this name seems to be semi-prostrate. Originated as a seedling in the de Forest garden in Santa Barbara, California. ['Lockwood', 'Lockwood Variety']

An erect, pink-flowered shrub with leaves to 3 mm wide; it is a selection from the wild in Majorca.

S Upright' An erect, multi-stemmed shrub to 2.5 m tall with slate blue flowers that originated as a cutting from Sissinghurst in 1957 and was propagated in California by Elizabeth de Forest. This is the most widely available Rosemary in Europe, often simply sold as r. officinalis. However, the name may be found applied to any erect form.

A name unadvisedly given to pink-flowered plants. The botanical name roseus was applied only to a form of r. officinalis growing in n Africa.

A semi-prostrate shrub with leaves of average width and deep blue flowers. Raised by Norman Hadden of Porlock, Somerset, uk, who said it was a seedling of 'Corsicus Prostratus', which had been an introduction of Treseder's Nsy. ['Seven Seas']

A pink-flowered, sprawling shrub. [Pink Remembrance is a promotional name for this cultivar]

An erect plant to 2 m tall with leaves 3-8 mm wide, the margins of which are only slightly rolled under. Flowers pale blue. Int. Uk by w. Arnold- Foster from Tuscany, where it is used as a hedging plant for small fields. [Tuscany Blue is a promotional name for this plant]