Latin name for the willow possibly from the Celtic sal—near, lis—water.

Willows are a feature of waterways and wetlands, deliberately introduced for landscape enhancement and erosion control. Various hybrids have been introduced from New Zealand.

In natural areas willows present weed problems, spreading by detached twigs and branches that root readily in soft soil by water. Even more threatening is the establishment of colonies of weedy seedlings when male and female plants grow in the same area: every care should be taken to prevent this when planting and the use of male clones has generally been advocated. In New Zealand seedling swarms of S. viminalis have established in many Canterbury Rivers.

The treatment of trees of waterways presented here follows the concepts of Carr (Flora of Victoria Volume 3, 1996).

A botanically accepted subdivision of the genus has not yet been produced but three broad practical groupings can be recognised:

Subgenus Salix - True Willows: mostly trees having leaves with narrow, long-pointed, minutely toothed edges; catkins with pale scales and nectary scales 2 or more in males and 1 or 2 in females e.g. S. alba, S. fragilis, S. babylonica. This group may be further loosely divided into the White Willows (e.g. S. alba) with leaves pale and hairy on the lower surface, and the Crack Willows whose leaves are hairless, with each marginal tooth having a small gland, e.g. S. fragilis.

Willows do not grow well from seed and are best propagated from branch cuttings taken after leaf fall.

Cricket bats, basketry, the bark extracts used for tanning. Salicine, a bark extract, was used medicinally for the treatment of headache. Erosion control.

Buds with 1 or 2 scales; male catkins not or hardly pendent.

About 300 or more species mostly temperate northern hemisphere, frequent along watercourses and in wet places, absent naturally from Australia and the S Pacific.

Hybridisation is rife among willows, S. alba being a frequent hybrid parent; this can make identification extremely difficult. Unfortunately the number of taxa available from nurseries is increasing and triple hybrids are sometimes listed. Leaves should be collected from mature upper branches as lower shoots may display considerable variation. The key should be used in the knowledge that naturalised hybrids and unusual variants may be encountered.

S. ×calodendron Wimmer is cultivated in the Victorian Snowies.

S. nigra Marshall, Black Willow from E and C North America was introduced in the 1960s for stream stabilisation and, in Victoria, is now spreading by seed and also possibly vegetatively along the Ovens, Kiewa, Avon and other rivers; it is also possibly in New South Wales. It has erect to spreading branches with brittle twigs, dark bark, linear-lanceolate leaves with a waxy bloom below and ear-shaped stipules. The catkins appear with the leaves. Both male and female plants are found.

S. purpurea L., Purple Osier, is a multi-stemmed shrub with at least some leaves more or less opposite; it is naturalised but rare in NSW and Vic (streambanks near Cann River and Strathbogie Ranges).

Key to the species of Salix 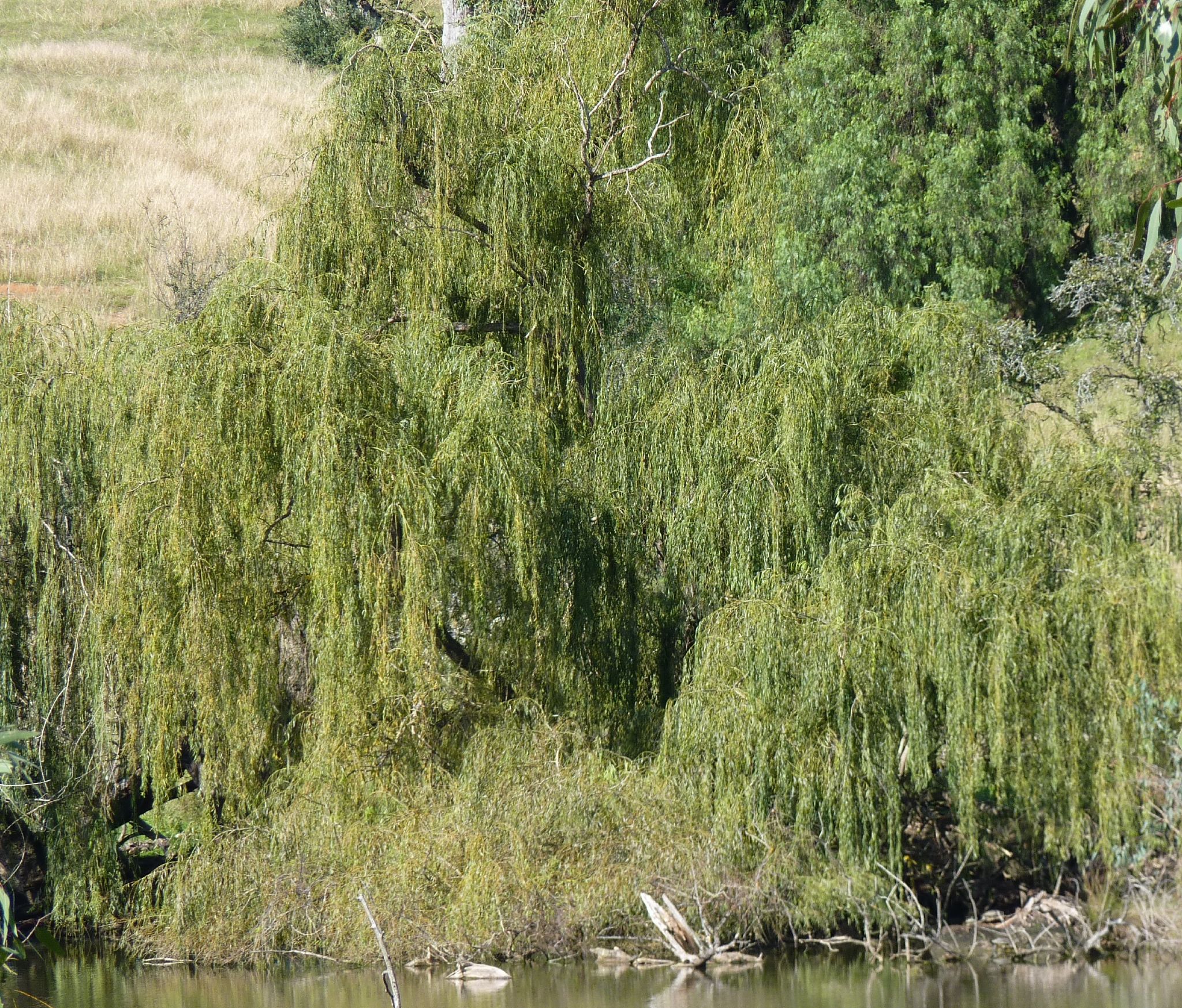