A compact, densely branched, suckering tree growing to a maximum height of about 30 m. Branchlets slender, soft hairy, giving a fine tracery in winter. Buds small and slightly soft-hairy. Leaves mostly 4-9 cm long, more or less round (width at least two thirds the length), abruptly pointed at the tip, sometimes cupped or with undulate margins, the basal lobe rarely crossing over the leaf stalk; generally rough and dull to slightly shiny above, soft-hairy below with tufts of hairs in the vein axils; vein pairs mostly 10-12. Leaf stalk mostly 5-10 mm long, usually hairy. Fruit 10-17 mm long with the seed in the centre and close to notch. [U. campestris L. in part]

Often used as a shade or specimen tree but now generally avoided because of its suckers. Not so widely planted as the Dutch Elm.

The habit typical of the English Elm in Europe (columnar with the main trunk extending high into the canopy) is not found in SE Australia where the general shape is more rounded although generally obscured by pruning.

This tree produces only a few viable seed from which highly variable offspring result both in habit and leaf characteristics, a feature noted in the literature and also observed in plants grown at the Royal Botanic Gardens Victoria (Melbourne Gardens) where seed of "Arthurs" elms have been grown; Arthur was the first garden curator. This seedling variation suggests one possible source of the variation to be found in these trees in Australia and also supports the claim that the English Elm is in fact a clone. The English authority on elms, R. Melville, regarded many of the trees cultivated in Melbourne as probable hybrids between U. procera and U. minor. These putative hybrids are similar to U. procera in having leaves with a rough upper surface and soft hairy lower surface while the size and shape is sometimes closer to that of U. ×hollandica. They are here subsumed under U. procera.

Can generally be distinguished from U. ×hollandica, by its smaller, almost round leaves that vary considerably in size on the same branchlet. Also the rough upper leaf surface and dense soft hairs on the branchlets, leaf stalks and lower surface of (mostly young) leaves. The tips of most leaves are abruptly pointed, the vein pair number rarely exceeds 12, and the basal lobe rarely covers the leaf stalk. 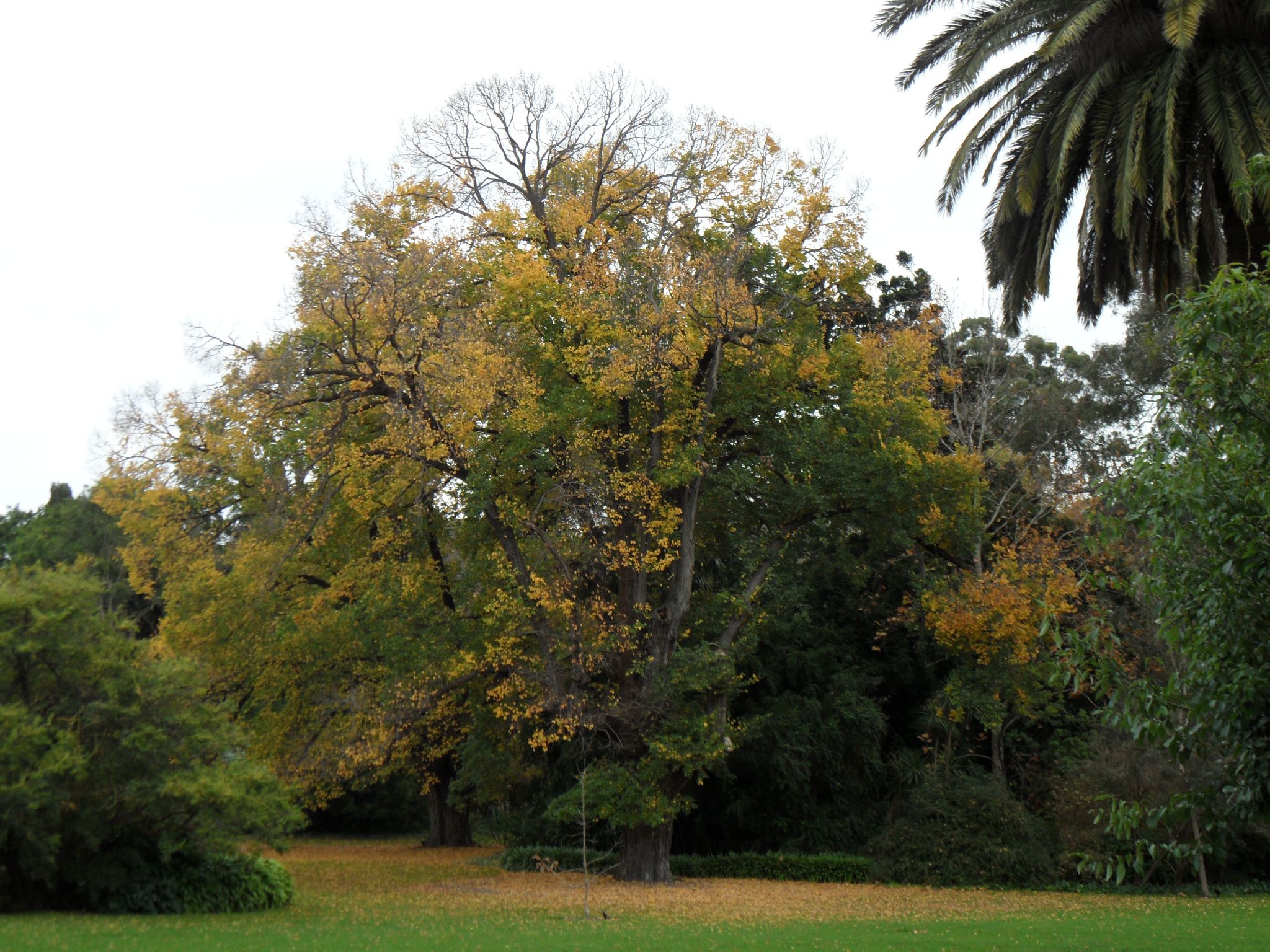 Though a valid name this has been incorrectly applied. Trees known by this name are referrable to U. minor 'Variegata'.

Extremely rare, wide-crowned, medium-size, slow-growing. In Victoria the only known specimen, which is at the Royal Botanic Gardens Victoria (Melbourne Gardens), is assumed to be at least 50 years old, it has yellow leaves produced mainly in the upper canopy and at the tips of the branchlets; they are large, elongated, and often with more than 14 veins, and the basal lobe sometimes covers the petiole-characters that show some affinity with U. ×hollandica. However, the mostly rough upper surface and dense soft hairiness of the lower surface, shoots and leaf stalks are more typical of U. procera under which it is placed by most authorities.

It is often confused in the nursery trade with U. glabra 'Lutescens' but the latter has a more widespread canopy, branching lower down and larger, more obovate, thinner leaves that are evenly lime-green throughout the canopy.