Rhizome short-creeping, much branched. Fronds evergreen in clusters, each to about 30 cm or so long, divided 2-4 times (sometimes more in cultivars). Blades arching, triangular in outline, sometimes narrow. Segments more or less fan-shaped but variable in cultivars, pale green, outer margin toothed and in cultivars they may be variously cut or lobed. Indusia round to kidney-shaped and situated in segment notches. Will tolerate cool conditions.

A popular cultivated fern world-wide that has become naturalised in S and C America, New Guinea and elsewhere. There are numerous cultivars of this species often intergrading and difficult to distinguish, many of which grow true from spores: the following are the most commonly grown.

Tropics of Africa and America. 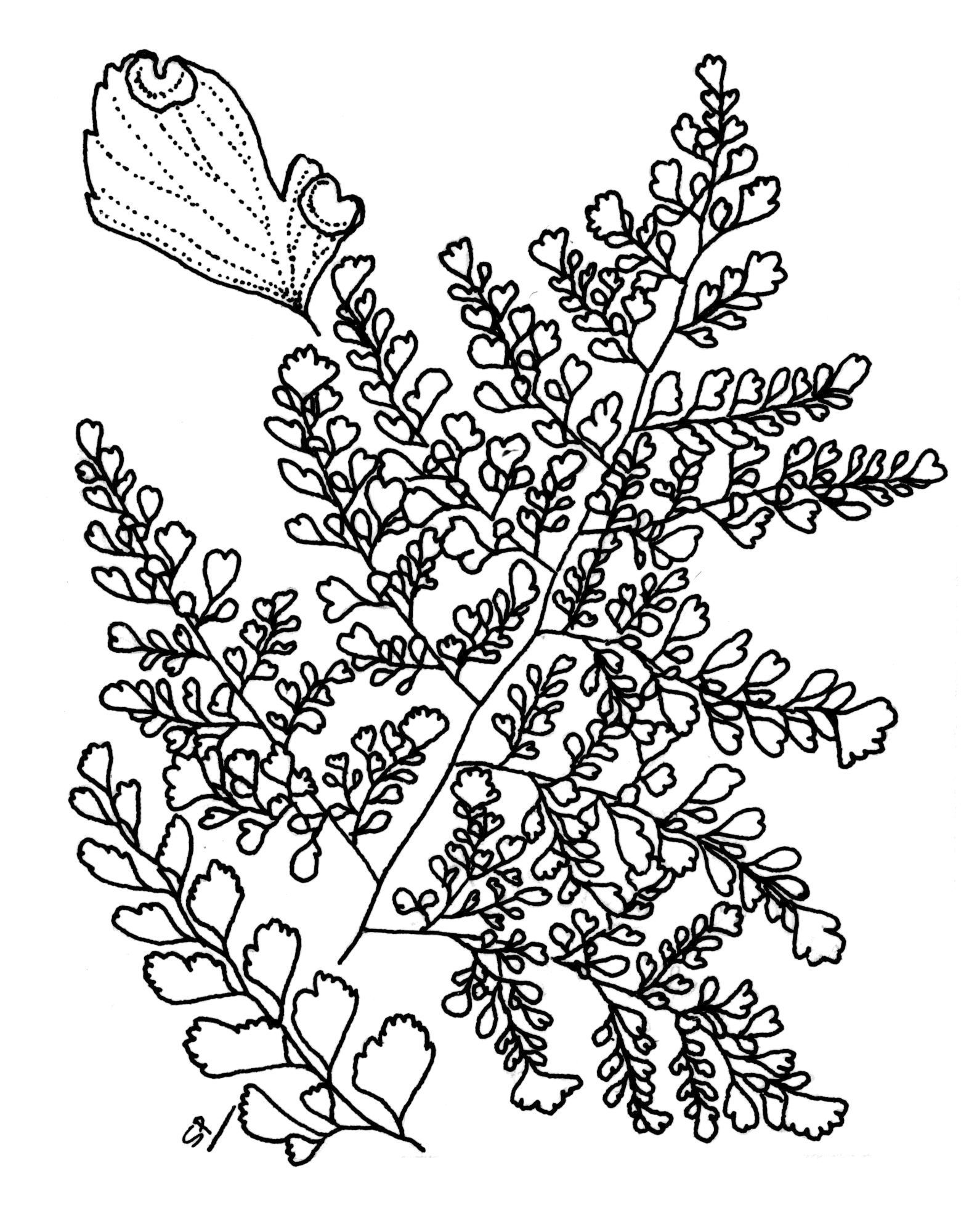 Medium-sized with arching, open, wispy fronds. Segments relatively small, shaped like tear-drops, a few being shallowly lobed. Fertile segments with one sorus per segment and generally smaller than sterile ones. A few similar cultivars may be encountered. Originated from nursery of R.G. Marsh, Ipswich, Queensland.

Medium size with erect fronds. Segments extremely variable in size and shape but with a distinctive shredded and emaciated appearance. Sori few and of variable shape on the toothed fertile segments. Similar to some a. capillus-veneris cultivars. In cultivation for more than a century, origin unknown.

Large and similar to several other cultivars. Segments shallowly lobed and with elongated wedge-shaped bases the terminal segments generally slightly larger and more deeply dissected; there is no toothing on the outer margin. Propagation by division or spores. England c. 1885.

More robust than the species with the segments larger and more deeply dissected. Possibly a hybrid between a. raddianum and a. capillus-veneris. Ferns under this name are variable, the variants apparently intergrading with other cultivars, for example 'Fragrans' is a variant that is hardly distinct from this cultivar. Segments deeply cleft with main lobes further divided, fairly densely distributed on the fronds. Sori mostly one per lobe. Propagation by division or spores. Origin unknown.

Upside-down Fern Fronds distinctive in being stiff and erect. Segments mostly shallowly lobed with pronounced wedge-shaped bases, densely distributed and overlapping atypically to give the impression that the fronds are upside-down. Originating from Switzerland.

Large with weeping fronds. Segments of uniform size, large, with both shallow and deep dissections, quite densely distributed on the fronds. A sterile cultivar propagated only by division. First described in 1911 and possibly originating from 'Elegans'.

Large fern with open fronds, the widespread elongated segments characteristically twisted and contorted with the edges toothed and variously lobed; the smaller fertile segments generally with one sorus per lobe. The yellowish veins in the segments give the plant a variegated appearance. Possibly originated as a form of 'Gracillimum' with more deeply lobed segments.

Large with a formal and symmetrical appearance. Frond segments widely and evenly arranged. Segments divided into mostly 2-8 deep finger-like lobes that generally divide in pairs. Propagation is by division as the spores do not come true to type. Variable and with numerous related cultivars. Origin unknown.

Fronds weeping. Segments extremely small and numerous, narrowly wedge-shaped, often only a few millimetres long in misty sprays. Sori one per lobe and often one per segment. Extremely variable with many related and occasionally variegated cultivars. Origin unknown.

Small erect fern with fronds to about 30 cm or so long. Fronds densely branched and congested, the segments deeply lobed and with toothed margins. Sori mostly one per lobe. Spores grow true to type. Probably originated in France in the early 1880's, selected by Mr Pacotto of Montreuil near Paris from a batch of sporelings.

Segments variegated with elongated flecks of white. The degree of variegation is variable and other variegated cultivars may be found. Origin unknown.