Shrub or small tree. Shoots hairy, at least at first, flexible, 4-angled in section but without pronounced wings. Leaves mostly 1.5-3 cm long, dark green and shiny above (except in variegated cultivars), often with a notch at the tip and white hair at the base and on the stalk. Flower clusters axillary, about 5 mm wide with ovate, pointed bracteoles. Fruit with straight styles, about 2.5 mm long. 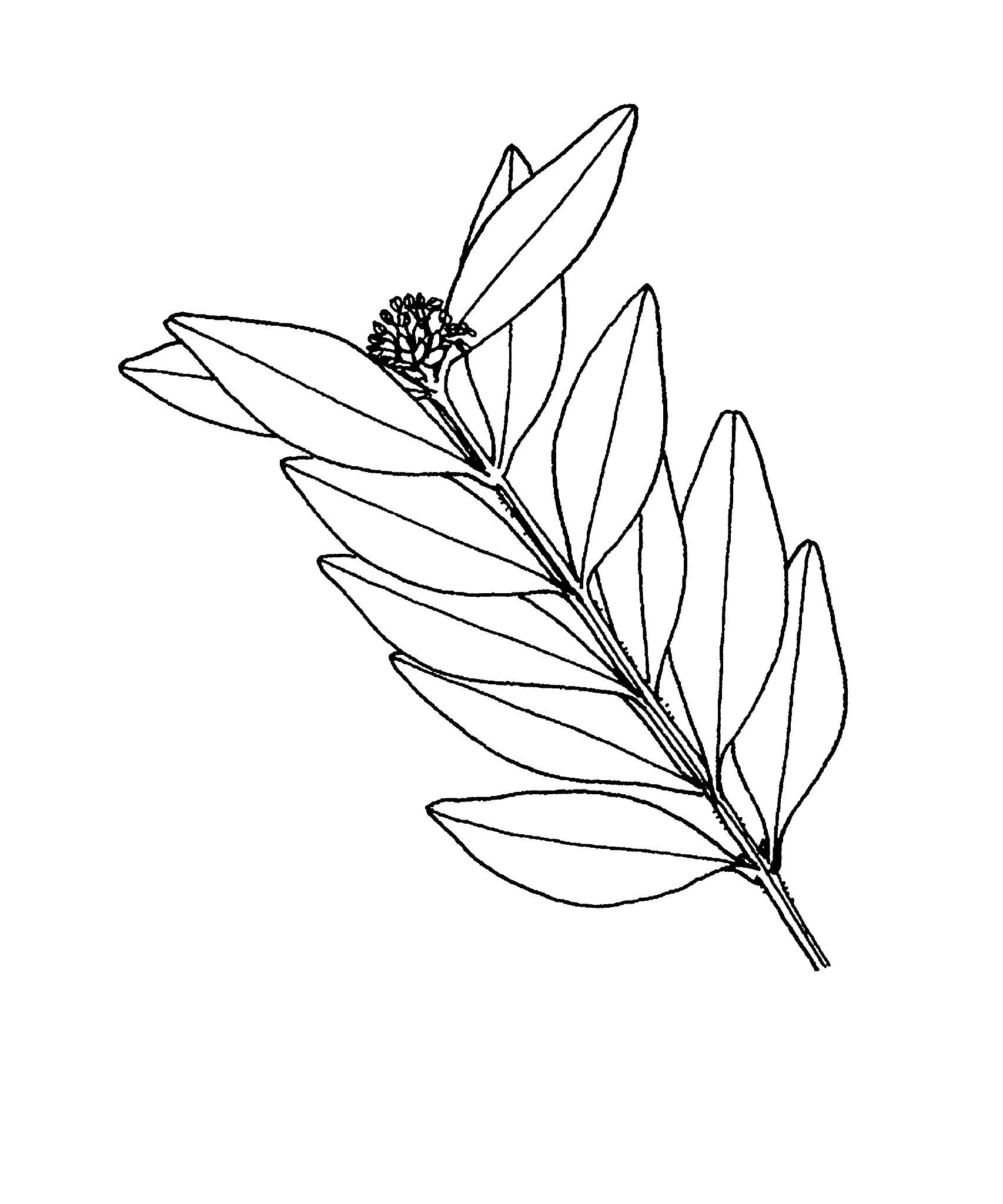 Growth dense and compact. Leaves mostly 2.5-3.5 cm long, 2-ranked, arranged in one plane. Cultivated in the UK since 1756 or before.

To 50 cm or so tall in 10 years, spreading wider than high. Leaves narrowly oval with a white border of varying width, becoming pinkish if stressed. Originated c. 1783.

Large-growing, leaves with a blistered appearance. First described in Germany in 1864.

Habit compact, growing to about 1 m in 10 years. Leaves generally small and narrow, about 1.5 cm long,1 cm wide, sometimes distorted but all with the margin irregularly creamy white; will revert to green. Originated in Europe in the 1860s.

Has an unusual neat fastigiate to columnar habit and the leaves are slightly pressed together. Grows about 15 cm a year. Reported as an American cultivar sent to Blandy Experimental Farm, Virginia, in the 1930s, originating at the Royal Bot. Gds, Edinburgh or Royal Bot. Gds, Kew in the UK.

Upright with thick stems, orange at the top of the plant, leaves widely spaced leaving the stems exposed. Grows 10-12 cm each year. Spurge-like in appearance and recommended for hedging. Leaves up to 2.5 cm long, 1.5 cm wide, often waxy. Cultivated in the UK since 1913.

Habit spreading. Leaves ovate to orbicular, to 2.5 cm long. Grown in the UK since 1902.

Strongly growing upright plant with thick stems to about 2 m tall in 10 years and about 14 cm each year. Leaves deep green with a yellow margin, often restricted to a yellow spot at the tip, or in the upper half only. The tip is sometimes slightly deformed. Recorded in the UK in 1838. Syn. 'Aureomarginata'.

An old cultivar. A vigorous prostrate plant 50-60 cm tall after 10 years, most suited to trailing over embankments or as a weeping pot plant. Leaves long and ovate, to 2.5 cm long,1.5 cm wide. Known in England since 1914.

A wide-spreading plant growing to nearly 2 m tall in 10 years and up to 30 cm each year. Leaves waxy and pendulous at first, roundish to broadly obovate or ovate, to 3 cm long, 2 cm wide. Similar to 'Latifolia Macrophylla' but more upright, hardly spreading. Grown in Europe for about 150 years and listed in 1859.

Dutch Box (English Box, Dwarf Box). The most widely available cultivar used as a small hedging shrub that is amenable to trimming; it has a dwarf, dense, compact habit, and grows about 50 cm in 10 years. Leaves small, obovate, often cupped, about 1.5 cm long,1 cm wide with notched tips and the midrib white below. Originated prior to 1753.

Low and spreading with dark green, waxy, elliptic, notched leaves to 2.5 cm long, 1.5 cm wide. Collected in 1934 by Dr Edgar Anderson from the Vardar River valley in Yugoslavia and released in 1957.

An invalid unregistered name probably used incorrectly for one of the variegated cultivars listed previously.