Restricted in its natural distribution to 5 localities; 2 small Mexican islands, Guadalupe and Cedros off Baja California, and 3 small mainland populations. First described in 1837 and known for many years as P. insignis which was a name applied in 1844. This species, together with the closely-related P. attenuata and P. muricata (also with knobbed scales on one side of the cone) form a natural group of species from California and nearby islands. Spread of plants from plantations into indigenous vegetation occurs chiefly in Tasmania, the NE of Victoria, also in the Perth region, South Australia and cooler districts of New South Wales and Queensland. It is also naturalised on the Cape of South Africa and the North and South Islands of New Zealand. Experience in Victoria indicates the average life-span of P. radiata as 80-100 years although it appears that in exceptional cases this may extend to 150 years.

Widely planted, not only as a commercial timber but also as a windbreak and shelter for stock. Treated pine is widely used for construction. The wood can be worked easily and used for pulp, paper, veneeer, structural and decorative sawn timber. var. radiata This quick-growing tree, which yields high quality timber in a range of environmental conditions, is a major world source of softwood. New Zealand and Chile have vast plantations each of which double the yield of those in Australia and there are also large plantations in South Africa, Spain and Portugal. It is the major pine of commercial plantations in southern states. In the plantations of the Aire Valley of the Otways, Victoria, some of the world's largest trees of this species may be found, heights of as much as 65 m being reported. The first firm record of introduction of the tree is of a batch of seed for Melbourne and Sydney Botanic Gardens on the 'Duncan Dunbar' which berthed at Sydney in Dec. 1857. If this was its first introduction then the seed was soon distributed because Adcocks Nursery of Geelong lists P. insignis for the year 1857. A catalogue of the species of the Hobart Bot. Gds compiled between 1845 and 1857 includes P. insignis and Mueller's Catalogue of Plants for Melbourne Botanic Gardens lists it in 1858. In 1860 it appears in the Victorian Rules' Nursery catalogue and it was widely available in other nurseries in the 1860s, also in the 1860s passing from Melbourne Bot. Gds to landowners and state reserves and possibly to other states, notably to South Australia in 1866 and Tasmania a few years later. Mueller's suggestion, as early as 1859, that it would be a good plantation species was first taken up by South Australia in 1876 with Victoria following in 1880 with the first plantation at Mt Macedon, and in the late 1880s at Creswick and the You Yangs. Canberra plantations were initially established to cover hillsides denuded by clearing and overgrazing: it was not until 1925 that it was recommended for commercial timber production with the aim of making the ACT self-sufficient in softwood. The first major planting in Tasmania was in 1921, the largest plantations now being in the north of the island. By 1925 all southern states had plantation programs based on P. radiata. In New Zealand the timber industry was based, from 1840 to about 1905, largely on the endemic Kauri, Agathis australis; P. radiata then became the major commercial species: records are uncertain but it was well established there by 1865 with Pseudotsuga menziesii being the second most important timber tree in New Zealand and P. nigra being used on poor soils.

Black deeply furrowed bark; asymmetric cones with scales generally swollen at base of long side.

Cedros & Guadalupe Islands (Baja California). Leaves in 2's with smaller cones 5-9 cm long having less pronounced swollen knobs on the scales. Very rare in cultivation. Paired leaves are occasionally found among the 3's on var. radiata, a character that complicates identification especially as these may sometimes form a majority as on the Newhaven specimen listed below. 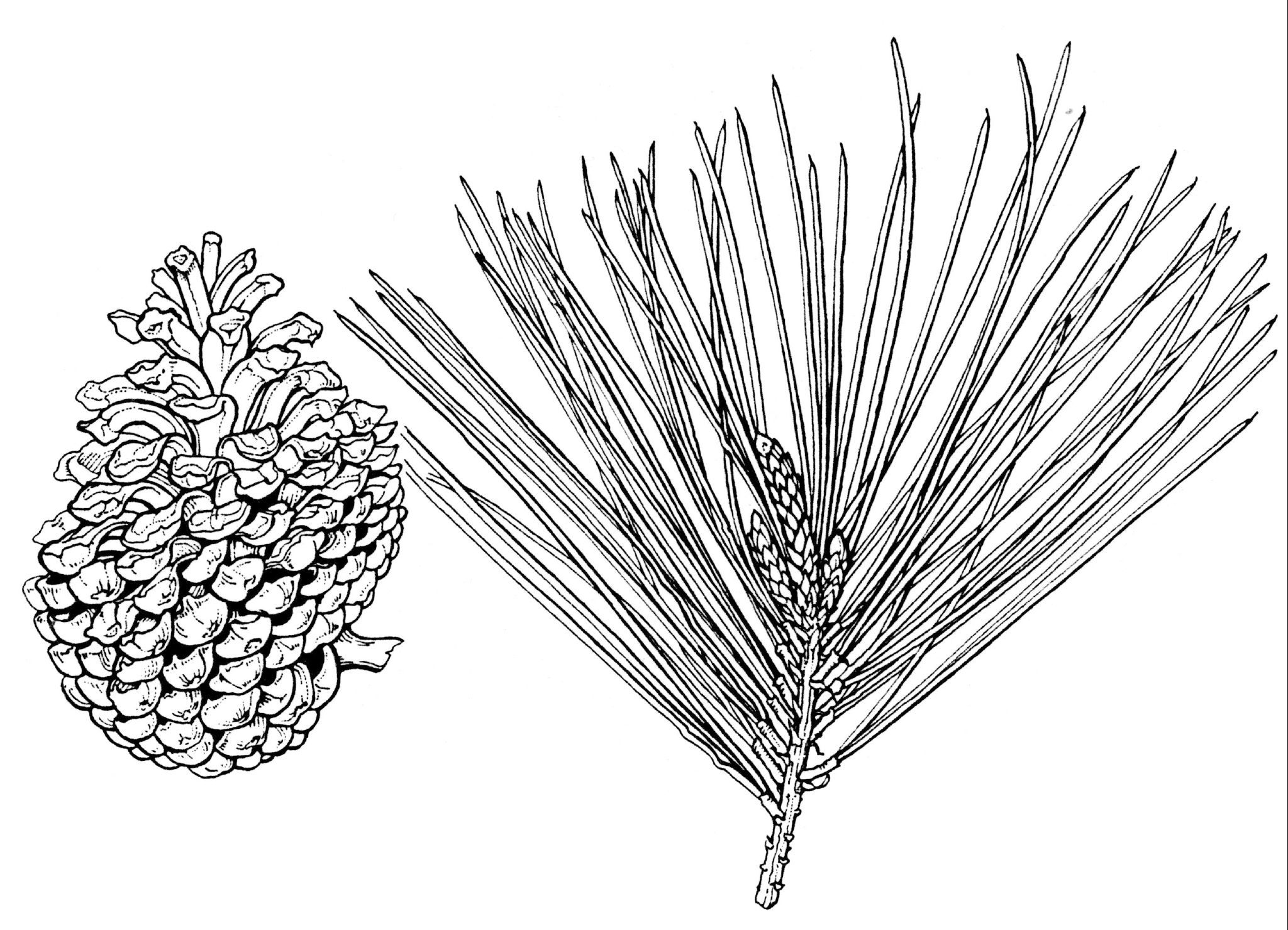 Yellow-leaved. Raised in New Zealand, the original tree on the South Island c. 40 years old in 1991.

('Gold Nugget') Upright and dense when young developing a leader after a few years; colour best in summer. Grows about 15 cm a year. Golden sport or witches broom named for the wife of Peter Nitschke, Australia.

Dwarf, dark green, globose. Grows to a diameter of about 1.3 m in 10 years. Witches broom found near Crafters, South Australia by Peter Nitschke and introduced c. 1983.

S Gem' Dark green, dense, broadly conical but narrowing with age; needles long. Grows to 2 m in 10 years. Selection discovered by Peter Nitschke of South Australia that cones, producing viable seed from which other dwarf selections have been made.

Compact and flat-topped without a leader; needles pale green and mostly in pairs except near the terminal buds. Grows c. 10 cm a year. Selection by Peter Nitschke, South Australia from a witches broom found at Littlehampton, South Australia.

Foliage with patches of yellow and occasionally whole branches yellow; will burn late in the season. Grows to 6 m tall in 10 years. Found as a seedling and introduced c. 1980.